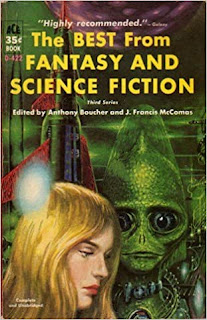 I had forgotten that my mom has a whole pile of old Best of F&SF paperbacks stashed away, and I borrowed a few!  This volume was published in 1954 and consists of the best stories from the previous year, so that's pretty vintage.  This far back, most of the names are not familiar to me; I only recognize three out of 16.  All of the stories were pretty good; some are funny, others sad or romantic or spooky, but I'll just pick out three or four.

"Maybe Just a Little One" is a comedy in which a physics teacher develops home atomic power from plain old beans -- the crucial element being called frijolium.  But nobody takes him seriously -- reporters make him a joke and the government won't even see him.  Until the leaders of a tiny little country ask him to come and help them lift their people out of poverty with this great invention.  They won't want any bombs....well, maybe just a little one.

"Child by Chronos" is a nice little time paradox of a story.  Then there's "Snulbug," which has a teeny  and disillusioned demon, "The Maladjusted Classroom," in which a physics teacher solves the problem of a double-booked classroom in a new and unusual way...oh, plenty of stories.  I think "Lot" was the most disturbing, featuring a family where the father has been carefully planning for Doomsday.

These were a lot of fun!  I've decided to read the 8th volume next, just because it has a lot of names I recognize.

By the way, I was interested to note that at least a quarter of the stories in the volume were by women.  People talk a lot about women being shut out of the SF world in the past, but it seems to me that there were a lot more women writing SF than most people remember.