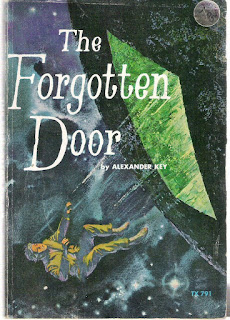 The Forgotten Door, by Alexander Key

As a kid I enjoyed the books of Alexander Key, who I don't think was terribly well-known for anything besides the Escape to Witch Mountain books, which were turned into not-very-good Disney movies.  But he wrote quite a bit of other stuff too, and I remember this one.  Some years ago I picked up an old school library copy, but I hadn't actually read it since I was a kid.

Little Jon is out watching the stars with his family and neighbors when he stumbles over some rocks and falls -- right into a different world.  The door had been sealed up long ago but something broke.

Jon lands in an unknown mountain area, with a cracked head and a busted ankle.  He follows a deer down the mountain and winds up being taken in by a kind family, but suspicious neighbors, frightened by Jon's oddness, become more and more intolerable.  How can Jon ever make it home?

The Key stories that I've read all feature a world of people who are human, but nicer -- they live in harmony with nature, can communicate telepathically with animals and each other, and are very peaceful.  Children brought accidentally into this world are confronted with unkindness and violence, and are bewildered by it.

I enjoy this story and the ones like it, though they're a little simplistic.  All of Key's books are available on Kindle, but in my opinion they're on the expensive side.