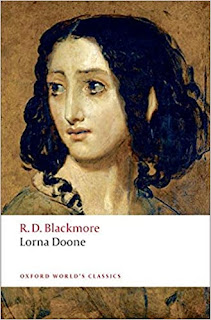 I am happy to report that I enjoyed Lorna Doone quite a bit!  It's an exciting historical romance of a story, very much like something by Sir Walter Scott.  And it is not set in Scotland at all; I was completely wrong about that.  It is set in Exmoor, which I had to look up on a map -- I have helpfully included one near the bottom of this post, so you can see where Exmoor is too.  Much of it is now a national park.  Also, Porlock is one of the larger towns in the area, so I kept thinking of Coleridge, who is not in this story.

R. D. Blackmore had a long writing career (which was a side gig to his main interests of classicism and fruit farming!), and he wrote a lot of varied stuff.  I'm going to have to get Erema, which is set in California!  Lorna Doone was his big smash hit of a novel, published as a triple-decker -- not in a serial format.  It was hugely popular, everybody read it, and the foreword says that in 1906 the all-male student body at Yale voted it their favorite novel.  It remained a standard favorite for decades, but I think now you'd be hard-pressed to find a lot of people under, say, 50 who have read it.

Set in the late 1600s, this is the story of John Ridd, yeoman farmer, who is writing his life story in his old age.  The whole Exmoor district is oppressed by the Doones -- a family sired by two brothers who had their lands and fortunes taken from them.  So they set up in a well-defended valley, and rob anyone they please -- and they murdered young John's father.  As a boy, John meets a lovely little girl near the Doone valley who warns him about the danger he's wandering into, and as a man, he falls in love with her.  Lorna has been raised as the Doones' future 'queen,' destined to marry one of the men that she hates and fears -- she loves John, but how can she escape the valley?  How can they avoid the Doones' inevitable murderous revenge? 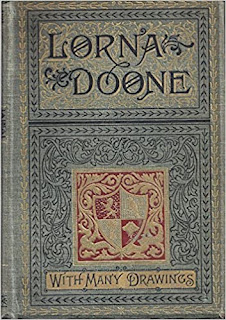 Since this is such a long novel, there is plenty of time for character development and side plot.  We get to know John's family -- his beloved mother and sisters, as well as others, including a highwayman cousin.  John is called to give legal evidence in London, and we meet King Charles II and the infamous Judge Jeffreys.  We witness the Monmouth Rebellion, and at last the Doones go too far.

John is the narrator, and he lets us see deeply into his mind and feelings.  He worries a lot, not only about his status as a respected figure in the area, but as a man -- he is concerned with doing the right thing, and about whether he is living up to his ideas of manliness.  It's a very Victorian narrative; although it's set mostly in the 1680s, it's very difficult to imagine most of the main characters as 17th-century people.

Blackmore uses quite a bit of real history, people, and places for his story, but he freely mixes legend and actual events together, so he called it a romance, not a historical novel.   There seem to have been Doones, but there wasn't a Lorna.  He took bits of real incidents and used them as he pleased.

It's a good novel and a good read with lots of excitement and action; although my copy is 650 pages of smallish print, I didn't find it difficult or a slog.  I can see why it was so popular for so long!  I can also see why it has lost popular appeal now; it is very long.  Anybody who enjoys the novels of Scott would love Lorna Doone, but hardly anyone reads Scott anymore either.  You know what though, it would make a pretty fabulous mini-series, like Poldark or something.  (I have not read or seen Poldark.)  People would probably be disappointed over how chaste the story is, though -- the BBC would inevitably spice it up.  But now that I think of it, I don't know why they haven't made it into a mini-series yet.  There are some spectacular action scenes!

I think I'll finish up with a line from the story that caught my eye.  John is writing about some dodgy dealings he saw in London:

Now this may seem very strange to us who live in a better and purer age—or say at least that we do so—and yet who are we to condemn our fathers for teaching us better manners, and at their own expense? With these points any virtuous man is bound to deal quite tenderly, making allowance for corruption, and not being too sure of himself.

Good advice for any era.