Alpha Centauri -- Or Die! and Legend of Lost Earth 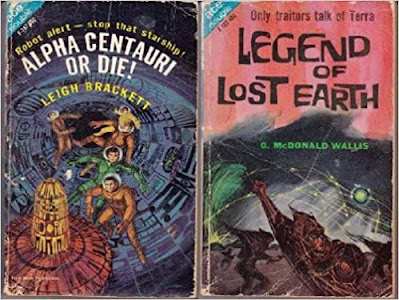 It's my Ace Double for the month!  (I might read more, but one turned out to have mildew problems, boo, and the other has two stories by MZB, who I don't love.)  I had fun with both of these tales, which were published in 1963.

Alpha Centauri -- Or Die! is set in a future where humans have colonized the solar system....and then, in an attempt to keep everything very stable and safe, have forbidden almost all movement.  You can't change planets or even areas of planets, and only empty robot-run ships travel the distances between.  Well, Kirby (an aging space pilot) and his friends are tired of being chained to Mars, and for years they have been getting an old, hidden rocket ready to go.  They'll take their families and head to Alpha Centauri, which is known to host an earth-like planet.

So there's lots of danger to dodge!  If they can get away from Mars, it means over five years in space, and a robot ship will be sent in pursuit to destroy them.  If they can get to the planet, will they be able to stay?  Or will there be unknown dangers?

It's a good story with plenty of excitement, though it has one element that really bugged me.  Kirby's buddies all grab their wives and kids and bring them along -- without talking with their wives beforehand.   This is pretty astounding, but it also provides a good part of the engine of the story.  Brackett spends time meditating upon the different motivations of the men and women and how they react to circumstances.  His native-Martian wife, Shari, tells him:  "...remember this.  A man thinks usually in straight lines.  Women think in circles."

Legend of Lost Earth is set in a far future, on the planet Niflhel.  As far as Giles Chulainn knows, humans have always and only lived on Niflhel, with its soot-filled air and obscured sky, its meagre water supplies and synthetic materials made from the minerals they mine.  The story of Earth, a beautiful green planet, is just a legend, a fairy-tale for malconents, but he decides to drop in on an Earth-worshippers meeting on a whim.  Giles then starts to find out that maybe Earth isn't just a story, but if it isn't, surely nobody could get there; it must be a far-distant planet, and there is no space travel....but then why is the government working so hard to shut down the people who believe in Earth?

This was an intriguing novel that draws on Celtic legend; the inhabitants of Niflhel are of Irish descent, and dream of lost Tir na nOc, or Earth, or Britain.  I liked how Wallis solved the problems she set up and what reality turned out to be.  It was an unusual kind of a story, I thought.

I've now read quite a few books and stories for Vintage SF Month, and I think the comment I made earlier holds.  I did not plan my reading or look for certain authors; I pretty much just took things from the pile that had accumulated from my habit of grabbing almost any ratty old SF paperbacks I saw that came through the library donation queue.  And I have accidentally read mostly women SF writers this month.  So I'll say it again: "People talk a lot about women being shut out of the SF world in the past, but it seems to me that there were a lot more women writing SF than most people remember."