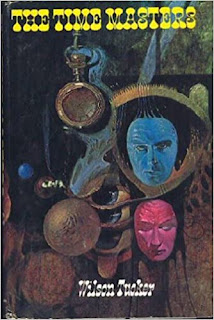 The Time Masters, by Wilson Tucker

What would an SF book from 1971 be without a weird psychedelic cover?   It's a necessary ingredient!

An accident to an exploratory spaceship leaves most of the crew dead, but at least one survivor manages to aim himself at the nearby planet.  He's pretty sure his wife must have survived too, and hopes for other crew-mates.  Maybe they can find each other once they land...

...and we switch to 1970s Knoxville, Tennessee, where some FBI types are investigating one Gilbert Nash, a PI who hardly ever works, but subscribes to every scientific journal there is, and who just happened to move into town right before a governmental research lab was established.  And one of the scientists there has this wife who seems to know more about his work than he does, and then he turns up dead.

This was a fun read (though it does make me wonder just how many PIs are in old SF novels!  That's two in a row!  I guess because you can make them do almost anything).   It was pretty clever and while I could see where the story was going, it also surprised me.

Also, this novel is badly titled.  The 'time masters' are more like time victims.  They are not masters of time at all!