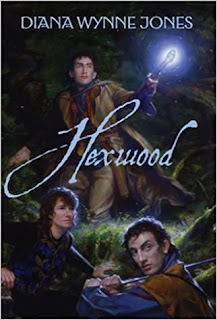 I love Hexwood so much.  It starts off with two stories: a girl in an English village, who has been ill and is therefore bored stiff, and an administrator of a lowly bureaucratic department of a galactic corporation/empire who is dismayed to receive a report of a problem on a backwater planet.  The two stories of a village girl and a galactic empire turn out to be in fact the same tale, and this tale is being told by the Bannus, an extremely intelligent machine that can run scenarios in order to predict the consequences of decisions.  It has co-opted a whole lot of people into the story it is enacting, and all of it with the goal of bringing down the cruel Reigners who have run the galaxy for a thousand years or more.

I'm not very satisfied with that description, actually, because it doesn't give the least hint of the mystery, adventure, puzzle, intrigue, and tragedy (as well as comedy) of Hexwood.  But I wanted to bring out the how the Bannus is manipulating everyone.  The characters have double (or triple) lives, with the action centered on a small wood next to a village and an old farm -- which somehow becomes a forest containing a river, a camp, a castle with knights and ladies, an entire band of outlaws, and even wolves.

As a result, the story is very difficult to keep straight, and even though I've read it many times, I can't remember everything.  The various main characters each have at least two identities, often more.  I just about need a chart for the Prisoner, the King, and the Boy, so I've written it out:

The Prisoner is also Martellian, a former Reigner who warred against Reigner One (Orm Pender, his own half-brother, whose mother was a witch from Lind) and was put in stasis for a thousand years.  On Earth he was known as Merlin, imprisoned in a cave.  And in the story he is the boy Hume.

Martellian had descendants he bred for fighting dragons (aka Reigner One), and one was Fitela Wolfson, also knows as the Boy, and Martin in the story.  Fitela appears in Beowulf, and is known as Sinfjötli in the Song of the Völsungs -- he is Sigurd's brother and the son of Seigmund.  (All the Sig's invariably give me a headache.)

The King is Sir Artegal in the story, and he turns out to be King Arthur, another fighter against the Reigners who was put in stasis, and entered legend as a more local leader.  Remember, also, that Sir Artegall is a character in the Faerie Queene, who embodies justice and is destined to be the progenitor of the British line of kings (though not Arthur, who is a friend of his).

Mordion is easier to get a handle on.   But I think he is the most tragic DWJ character of all time, even more so than Jamie in Homeward Bounders.  (Which I'm going to read next.)


Hexwood was dedicated to Neil Gaiman, and in the process of writing this post I ended up at his blog post memorializing Diana Wynne Jones from March of 2011.  It was good to re-read it.  "As an author she was astonishing."  Yes, she was, and I'm sure Gaiman knows it much better than I do.

So, this is one of my favorites.  I have a lot of favorites, it's true, but this one I love for its complexity, depth, and tragedy.