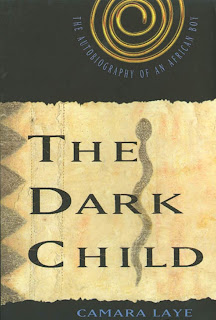 The Dark Child: The Autobiography of an African Boy, by Camara Laye

I'm happy I found this memoir, because it's a really lovely and heartfelt story.  Camara Laye was born in Guinea (at the time French Guinea) in 1928, and wrote this, his first book, in 1953 while he was studying in France.  It won the Prix Charles Veillon.*  He wrote three more novels** during his lifetime.  After his French studies, he went back to Africa, though not immediately to Guinea.  He worked for the new independent government of Guinea, but had to leave in 1965 due to politics, and spent the rest of his life in Senegal, where he died in 1980.

The memoir tells of Laye's childhood in the town of Kouroussa in upper Guinea, where his father worked as a black- and goldsmith.  His parents were very respected, and had spiritual powers -- Laye describes these in a very interesting way, because he's a modern educated man who doesn't believe in powers....except that he does, because he saw his parents.  So he has to just leave it there as something he can't explain. 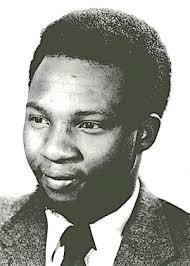 Young Camara started school and seems to have done very well there, but you can't tell from the text; he's much more interested in describing the town, the people, his family and friends, his mother's village, and special events in his life, such as the traditional initiations into manhood.  He only ever describes himself as young and ignorant.  But at 15, he left home for his uncle's house in the large city of Conakry to study mechanics and engineering.  Four years later he was off to France, and the story ends there.

Laye describes his life and family with so much feeling and depth.  It's truly lovely, and makes reading his story a joy.  Here are a couple of interesting bits:

I realize that my mother's authoritarian attitudes may appear surprising; generally the role of the African woman is thought to be a ridiculously humble one...but Africa is vast, with a diversity equal to its vastness.  The woman's role in our country is one of fundamental independence, of great inner pride.  We despise only those who allow themselves to be despised; and our women very seldom give cause for that.  My father would never have dreamed of despising anyone, least of all my mother.   He had the greatest respect for her too, and so did our friends and neighbors.  That was due, I am sure, to my mother's character, which was impressive; it was due also to the strange powers she possessed.

...we were entrusted with the herd of cattle which belonged to the school.  This last task was no sinecure.  The herd we tended was famous for miles around.  Did a farmer have a vicious cow, it inevitably ended up in our herd.  There was a good reason for this; the farmer, desperate to be rid of the beast, would accept almost any price, and the school authorities were only too anxious to take advantage of such a windfall....the result was that our school owned the most complete collection of sly, ornery creatures in existence.  When we cried out "Right!" is was just natural for them to turn left.

This would be a great choice for anyone looking for a slightly lesser-known, but important, African writer.  I look forward to reading more of Camara Laye.

*The Prix Charles Veillon was an international literary prize, awarded to novels in the three languages of Switzerland.  It's now the European Essay Prize.

** The Radiance of the King (1954/5?) is the one I plan to read.  A Dream of Africa (1978) and The Guardian of the Word (1978) are the other two, and I might want to read that last one too.  It's about Sundiata.
African literature memoir/biography read around the world