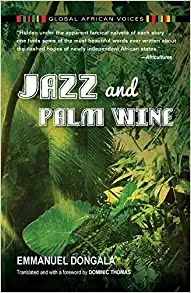 Emmanuel Dongala was born in the Congo (then a French colony) in 1941.  He studied in US universities during the 1960s, returned to an independent Congo as a professor in the 70s, moved back to the US during the time of civil war in the 90s.  He has written novels, poetry, and short stories -- as far as I can tell, in French.  This collection of short stories was first published in 1982, in France, but they had been written at different times before that, not all in the early 80s.  Dongala's life split between Congo and the US has given him a dual lens -- and a great love of jazz music.

The short stories all show a piece of ordinary life for ordinary people caught up in the changing world of post-colonial Congo, and the frustrations thereof.  Having shed the French colonial power, they look for a bright future of freedom, and find instead bureaucratic paralysis, Marxist rhetoric that fails to disguise the same old oppression in a new form, and an expectation that traditional beliefs will give way to a 'scientific' worldview imposed by those in power.

I particularly liked "Old Likibi's Trial," in which a village suffering from drought puts their traditional magic practitioner on trial, using scientific logic to prove that he must have used his magic to stop the rain.  "The Astonishing and Dialectical Downfall of Comrade Kali Tchikati" was also really good, and "The Ceremony" features a young militant wishing to rise in the world, explaining his situation -- which serves to show his struggle to even understand all this Marxist speech he has to use.  The last couple of stories are more about John Coltrane and jazz, in the US.

It's a very good collection; I enjoyed Dongala's wit and feeling for the people he portrays.