The Dark Side of the Sun

--I've put a short update at the bottom if you're interested.

I've had this book sitting around for a while, but had never read it, so this was a perfect opportunity.  This is Pterry's first 'adult' novel (as opposed to the juvenile fiction he'd written previously), from 1976, and pre-dates the Discworld books.  It's science fiction, very short, plays with some intriguing ideas, and is a lot of fun.

In the far future, humanity has spread over several worlds, sometimes in cooperation with others of the 52 known sentient species.  All of them developed within a fairly small section of the galaxy, the rest of which appears to be sterile.  And there are artifacts left from the Jokers -- a super-intelligent, utterly mysterious, vanished race.

Dom is the heir to the massive corporation and planet of Widdershins, a world that is nearly all swamp but that produces two incredible materials.  Widdershine humans live in cooperation with the phnobes, another sentient race.  Dom's father was expert in probability math, and predicted that his son would be assassinated on the day of his investiture as Chairman.  And so he is...but when he survives the assassination, a whole new set of probabilities come into play, and Dom (now greenish) sets off with his ragtag crew to find the Jokers' world.  To get there he'll have to avoid a lot of assassinations.

Lots of fun, and a wonderfully populated galaxy full of interesting creatures. The probability math contains definite shades of Hari Seldon, but only in the most glancing way.  It's entertaining to spot little things that will eventually end up in the Discworld books; Widdershine celebrate Hogswatch, and there are other things -- sometimes just a characteristic phrase or sentence.

Three races walked like men. One of them was Man. Taller than men, but generally lighter, were the phnobes. Much smaller than men, but built more on cuboid lines so that they looked like heavy-gravity chimpanzees on a steroid diet, were drosks.
Phnobes came in three sexes. They had a secondary, vestigial brain. They evolved on a world with no readily available metal. In cerebral matters they were supreme. A world where most of the higher animals were adapted to a tri-sexual system needed a race with brains.
Drosks came in two sexes, eventually. It made sense on a harsh, bitter world. The young males evolved into mature, strong-minded females after about the first third of their life. Their social system was intricate but was surpassed in complexity by their religion, a fiery edifice involving the double star and three large moons in their system. Drosks were cannibals, it was part of the religion. Drosks found it difficult to conceive of a number greater than seven. Drosks periodically built up a machine-age civilization then, for no well-understood reason, carefully dismantled it and reverted to barbarism.
Compared to all the other fifty-two races known, drosks, phnobes and men were like brothers.

There had been a thousand years of colonization. Now the sinistrals of Widdershins had night-black skin, no body hair, a resistance to skin cancers and UV-tolerant eyes. By mere chance, too, half of them were left-handed. On Terra Novae men were stocky and had two hearts. Pineals had more in common with phnobes than other men. The men of Whole Erse lived in a permanent war.Eggplanters were simply strange, and edgy, and vegetarians green in tooth and thorn.

For a few thousand years the planet glooped and woobled its watery path between the stars, trailing behind it across the galactic sky a shimmering rainbow of steam that photon pressure sculptured into vast ghosts. Then it exploded.

If you've never read this early work, put it on your list.  Don't miss it. 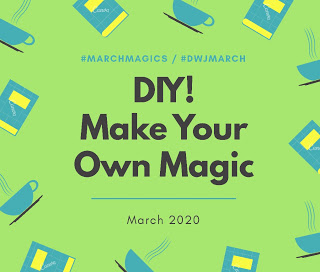 "Make Your Own Magic" has certainly turned out to be an appropriate theme for March 2020, hasn't it?  We've been mostly staying home all week, and last night our state governor ordered all 40 million Californians to stay home if possible, only going out for things like food, medicine, and exercise that isn't too close to other folks.  My husband is working from home, which it looks like I'll be doing too (how???), and my 16yo will be doing school at home for at least a month.  This overprotective mom is not thrilled about the oldest living down in Sacramento, but there's nothing to be done about that.

What have you been doing with all your time at home?  I've done these things: