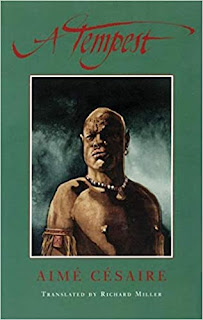 A Tempest, by Aimé Césaire

Aimé Césaire, born 1913 in Martinique (which is still officially French), became a world-renowned dramatist and poet; he, along with his friend the poet Damas, established the idea of "Negritude," that black people did not need to assimilate into European culture, but had valuable cultures of their own to contribute to the world.  Leopold Senghor was the leader of this movement; I read some of his poetry in 2014.  This was an anti-colonialism black pride movement, largely in the areas that had been colonized by France, in the 1930s - 1950s.  A Tempest was published in 1969.

Césaire's play is an adaptation of Shakespeare's Tempest which casts Ariel as mulatto, and Caliban as black, both enslaved by Prospero, who has arrived on their island and taken illegitimate possession of it.  Ariel works hard for Prospero, always hoping for his long-promised freedom and trying to appeal to Prospero's conscience, while Caliban has given up waiting for Prospero to act rightly and has turned to rebellion and violence for his hope.  He has seen through Prospero's claims to superiority and scorns them.  The two argue their cases with each other, but neither can convince the other.

As the regular action of the Tempest plays out, this second drama fits into the spaces.  European society is revealed as corrupt and decrepit, and when everyone (including the happy young lovers) prepares to leave, Prospero frees Ariel but chooses to stay on the island in order to impose civilization upon it and Caliban, whom he will not leave alone.  He would rather continue in his futile project than go home.

A fascinating commentary on colonialism and the damage it inflicts on all sides.  I'm sure I didn't come anywhere near plumbing the depths of this play.
Caribbean literature drama