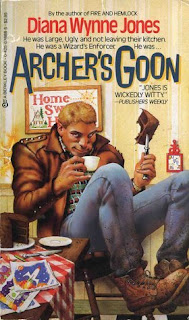 What with everything going on this month, I've pretty much fallen back on old favorite DWJ titles, of which Archer's Goon is a prominent member.  I love the humor in this book, the family -- this must be one of the very few DWJ titles that features a family that isn't completely, totally dysfunctional, though it is certainly eccentric! -- and the sheer chaos of this really pretty strange story.

Howard, age 13, has an ordinary boring life until a Goon shows up in the family kitchen, demanding "two thousand" from Howard's dad Quentin.  Howard finds out about who really runs his town -- seven powerful siblings who have been stuck there for years, and aren't very happy about it.  The siblings figure that Quentin's words must be what's keeping them trapped, and they're determined to force him to write more words for them.

This is one of those stories where everything gets turned upside-down, and it's Howard's job to put everything back in order -- only better this time.  Here, the siblings are the dysfunctional family, and in comparison, the Sykes offer a loving home where everyone rubs along in a comfortably imperfect and forgiving way.

It's also a meditation on various forms of power, and the corruption thereof.  Archer relies on money and charm; Dillian is manipulative and not above using force; Shine is violent.  Torquil and Awful both have difficult tempers that they need to learn to control, and Howard knows that he could easily become as selfish as he was as Venturus.

Also, I don't think Archer's Goon has ever had a decent cover.  It's a favorite of mine but all the covers are...awful.  This one is the ancient paperback I have, which gives the Goon too much hair and makes him look like he has pointy ears.


_____________________________________
I've been meaning to watch the 1992 TV adaptation of Archer's Goon for years.  I watched the first couple of episodes a while back, but didn't continue; I never seem to have much time for TV.  Well, I sure have time now!  So I watched all six episodes.  They really are pretty dreadful, but that's largely because of the extremely low production values and the bad over-acting.  It comes off as very amateurish.  Several of the actors went on to have long careers, but you wouldn't know it from this show.  It is fun to see how they translated it to a film medium, they stick close to the original story, and it's nice to hear a good deal of the dialogue straight from the book.  But it's terrible.