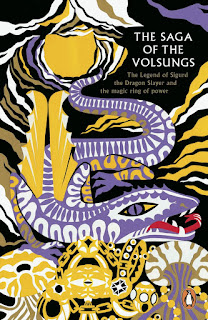 After the Beowulf readalong, I went on quite the Anglo-Saxon/early medieval kick.  Beowulf mentioned Sigurd, so I wanted to read his story.  I read some little texts from the British Museum about the Lewis Chessmen and the Sutton Hoo helmet; those were great. Then I started the Venerable Bede's Ecclesiastical History, but I'm not finished with that yet; still about 100 pages to go there.  Anyway, for Sigurd's story I picked up this fancy new Penguin edition, featuring the 1990 translation by Jesse L. Byock.

The saga traces the history of the Volsung clan, starting with Sigi and going down through lots of murders and power struggles and incest (!) and people murdering their own children (!) until we get to Sigurd, who kills the dragon Fafnir.  Fafnir has not always been a dragon; he is the brother of Regin and was once human.  Regin gets Sigurd to agree to kill Fafnir by promising him the dragon's massive hoard of gold.

This was a detail I really liked; the poet had a nicely realistic idea of what constituted a massive hoard of gold:


There Sigurd found an enormous store of gold, as well as the sword Hrotti.  He took from there the helm of terror, the golden coat of chain mail, and many other precious things.  He found so much gold that he expected it to be more than two or even three horses could carry.  He took all the gold and put it into two large chests...

I think movies have really distorted our ideas about treasure caves, hm?

After this, Sigurd meets Brynhild, a warrior maiden who he promises to marry.  But things get complicated; Sigurd marries Gudrun after she gives him a potion that makes him forget Brynhild, and after that everything just goes tragically wrong.  Although, interestingly, Attila the Hun shows up as King Atli Buðlason.