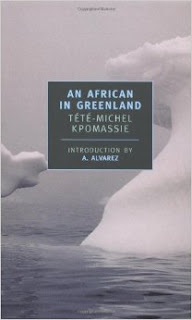 An African in Greenland, by Tete-Michel Kpomassie

Resist this fabulous memoir if you can (which you can't).  In the later 1950s, Michel is your average 16-year-old in Togoland, living your average life, until he sees a book about Greenland.  The idea of a place so completely opposite to his home--cold and frozen all the time, with no trees, and with a culture that listens to children--intrigued him so much that he decided he ought to go there.  And so he did.  (It helped that his father had just promised him to the python cult, to be trained as a priest.)  Michel left home and worked his way north.  It took six years to get out of Africa, and another two to work his way up to Denmark, where he could embark for Greenland.  All the while, he was studying through correspondence courses, and picked up several new languages.

Most of the book covers Michel's 16 months in Greenland itself, though.  He starts off in the south, and stays for a while, but always wants to move north.  His eventual goal is to get to Thule, the farthest north possible!  Michel lives with Inuit friends, learns the language, and becomes completely acculturated to life in Greenland.  His observations about Greenlander life and culture are always honest; he loves these people, but he's not going to cover up their flaws either.  The whole thing is just fascinating.

Kpomassie doesn't directly make comments on colonialism/imperialsm and so on, but he does describe the side effects of Danish rule in Greenland (and, every once in a while, French rule in Togo).  This makes for a very interesting perspective.  It's kind of depressing to read about the Danish bureaucracy deciding that the Inuit should all go live in towns, to make it easier to keep track of them...where they tend to end up unemployed.

I really enjoyed this memoir a lot.  Wow.  It's not always happy fun time, don't think that, but this is for sure one of my best books of the year so far.  What an adventure!
memoir/biography Translation Challenge travel