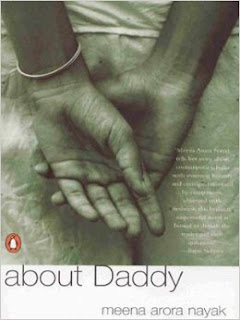 About Daddy, by Meena Arora Nayak

I picked this up from the stacks at work because I'm always attracted to works about India.  I'm kind of ambivalent on this one though.

Simran travels to India on a mission to scatter the ashes of her beloved father, whose last wish was that he rest on the border between Pakistan and India.  But then she's arrested for suspicious activity and spends three months in prison, where her perspective and priorities totally change.  Simran's boyfriend gets her out, but then she goes underground to join a peace movement led by the charismatic Kalida as she tries to heal the wounds left by Partition.

I liked that the novel portrayed a woman stuck in an Indian prison, where she makes connections with a bunch of different people.  But the setup felt contrived to me; Simran is horrifyingly naive (her parents never talked about India, because her father was so severely traumatized by what he had been through and done during Partition) and she keeps diving into trouble.  I think she's supposed to be impetuous and passionate, but it was mostly just exasperating.  I could see the final twist coming from a mile away, and the whole thing felt more like a message with a plot shoved into it than a good story that happened to have a message.  And the writing often felt overdone.

Not my favorite novel about India, for several reasons.  It's not terrible or anything, and I enjoyed parts of it, but I was often annoyed and was tempted to quit a few times.

It so happens that I read two novels focused on Partition right next to each other...so stay tuned.
Indian literature

Anonymous said…
I hope the other Partition novel is a better one for you than this! There are a couple of new nonfiction books dealing with Partition that I keep meaning to read. My knowledge of it currently is in very rough outline, and I'd like to have a stronger notion about it.
June 25, 2015 at 11:30 AM