How to be a Heroine 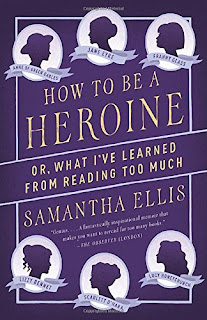 How to be a Heroine, or, What I've Learned From Reading Too Much, by Samantha Ellis

Reading memoirs are pretty hit or miss for me, but I was completely hooked by the first couple of pages of this one.  Ellis visits the Yorkshire moors with her best friend.  As they walk over land beloved by Emily Bronte, they argue about which heroine is better--Cathy Earnshaw or Jane Eyre?  Ellis thinks this is a no-brainer--obviously Cathy.  Who cares about plain, boring Jane?  Her best friend argues that Cathy just "makes everyone unhappy" with her bad decisions and her wailing, and points out that Jane is independent and principled and strong.  And revelation strikes Ellis:

I thought this story was fantastic and promptly needed to read the whole book.

Well, it turns out that the story about Cathy and Jane is my favorite part of the book and the rest of it didn't quite live up to that, but I did enjoy large swathes of the memoir.

Ellis starts off with her princess-obsessed childhood and uses it to meditate upon fairy tales and Hans Christian Andersen.*  She thinks about Little Women (and I disagree with some of her conclusions, as I often did). She visits Anne Shirley, Lizzy Bennet, and Scarlett O'Hara in her reminisces about how she tried to find patterns for living in her literary heroines.  Ellis talks a lot about her upbringing in an Iraqi Jewish family in London, which is pretty interesting; more to my taste than her later descriptions of love affairs.

In fact for a while there the literary heroines get pretty racy.  Ellis spends a chunk of time on Jilly Cooper, who sounds like a British Danielle Steele, and on the Valley of the Dolls books--stuff like that.  I liked the chapter on Flora Poste better.  (I love Flora Poste.)  Ellis meditates on Heathcliff and Cathy's melodrama, and finally, in a pretty excellent ending chapter, on Scheherazade.

I liked most of the book parts and was somewhat impatient with the memoir/personal introspection parts, which admittedly is my own problem since I did pick up a book that is a reading memoir.  On the list of reading memoirs I have read, this is a pretty good one.  I would like to argue with her about some of her thoughts, though.

So: Cathy or Jane?  My vote is Jane, every time.  I dislike just about everyone in Wuthering Heights. Whose idea was it that Heathcliff is a romantic hero?  He's horrible.  Jane is principled and independent, and sticks to her ideas no matter what.

*This reminds me: am I just older than Ellis, or is it something else?  Am I the only one whose childhood Disney experiences were not dominated by princesses?  Nearly all the movies I remember seeing--back when Disney re-released a classic cartoon into theaters every summer--were animal stories like the Aristocats or else fairy tales like Pinocchio and Dumbo.  I think I saw Snow White, maybe, but until Ariel came along in my senior year of high school I don't remember seeing any other Disney films with princesses; I pretty much had a princess-less childhood.  I did see Song of the South one summer, though.  Give me some feedback here; if you're 40 or over, did you see princess movies as a kid?
books memoir/biography