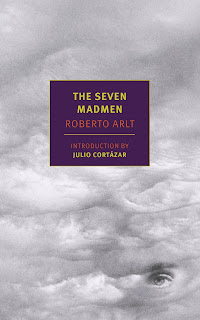 The Seven Madmen, by Roberto Arlt

Why did I pick this novel?  Well, it came along and I was looking for an Argentinian title that wasn't Borges.  I love Borges!  But I thought I ought to branch out a bit.  And this has a pretty intriguing title, plus I had heard of Erdosain before.  Upon such frail whims are my reading choices based.

Background: this novel was written around 1929, thus before anything I know about Argentinian history.  No Peron yet.  (Probably Hercule Poirot's buddy Hastings is running a cattle farm somewhere!)  The Depression hasn't even begun yet.

Erdosain is a hapless guy who is getting fired from his sad little job as a bill collector.  He embezzled 600 pesos* and he's got to pay it back right away.  Then his wife leaves him, and all he's got left is this awful cousin he hates.  Erdosain wanders the streets of Buenos Aires and meets up with a bunch of guys, most of whom are pretty strange, but the strangest of all is the Astrologer, leader of a burgeoning cult.  He plans to take over, and talks to his various followers in their own languages.  Communists think it will be a Red revolution; militarists think they'll be in charge, and so on.**  He'll get rid of unemployment by enslaving everyone, and fund it all with prostitution on a massive scale.  The seed money will come from Erdosain's annoying cousin, who they'll murder for his bank funds...

I can't say I really enjoyed this novel.  I finished it because it was short and I was already halfway through anyway.  It's a very 'guy' novel, and most of the guys are horrible people, and you know what, I just have a hard time stomaching novels where characters wax poetic about the beauty found in the suffering of prostitutes.  I'm sure it's a great classic of modernity but no thank you.


*600 pesos does not sound like much to a contemporary person, but it turns out to be quite a lot in 1929 Argentina.  A couple thousand bucks maybe.

**And again, I think of Agatha Christie, in Destination Unknown/So Many Steps to Death.