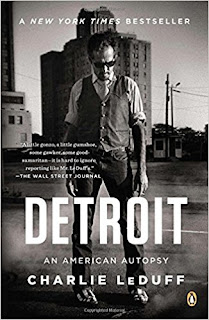 I've been meaning to read this for years, and it turned out better than I anticipated!  I hardly put it down for the day it took me to read it.  I originally heard of the book from my non-fiction loving buddy Maphead, who routinely supplies me with titles to put on that ever-growing TBR list.

Charlie LeDuff, journalist, decided to come home to Detroit in hopes of raising his daughter closer to family while simultaneously telling the world about the disintegration of Motor City.  He combines Detroit history with current politics and his own experiences to tell a story of corruption, decline, and loss of hope.  The book was published in 2013, just as Detroit was filing bankruptcy, and it seems that things might possibly be looking up a little bit these days -- let's hope so.

LeDuff keeps public servants, especially firefighters, at the center of his narrative.  Arson is both entertainment and income for some people, and Detroit firefighters are kept constantly busy putting out blazes in abandoned houses, for which they have to use equipment that is falling apart.  When LeDuff followed the paper trails of expenditures for firefighters, he found that millions of tax dollars were simply disappearing into fictional projects.

Detroit has always run on graft and backdoor dealing.  A strong system can withstand a certain amount of cheating, but as far as I can tell, there's a tipping point beyond which a society can no longer function properly.  Detroit passed that long ago, and also lost the industries that supported it.  (A person much more knowledgeable than I am might be able to compare with Chicago, which has a lot of corruption but still manages to function, if not very well, because it still has a lot of wealth and more diverse industries.)  The jobs disappeared and were not replaced, unless you count various forms of crime.

LeDuff also talks a lot about Detroit and race, which I knew virtually nothing about.  I knew that Detroit has a very large black population, of course, and I had rather had the impression that the factories there had fueled a rise in the black middle class, but I was not correct.  LeDuff explains that Detroit replicated a lot of segregationist rules, restricting black people to the lowest of jobs and to particular (very overcrowded) neighborhoods.  There was also a lot of rioting that I didn't know about.  So I learned a lot there.

Some years ago I read a book about global poverty that showed that a single-industry country is too precarious for survival.  Diversifying is the key to prosperity; if you only have one thing, most people will still be poor and that one thing will be fought over.  Diamond mines are a classic example, but I think Detroit qualifies too.  It was pretty much a single-industry city, and now that's just about gone.  There was nothing to fall back on.

This is a gripping story, and one I knew almost nothing about.  It's also -- as you might expect -- a very gritty book.  It could hardly be otherwise.
20 books of summer history non-fiction