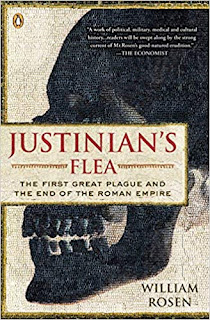 Justinian's Flea: The First Great Plague and the End of the Roman Empire, by William Rosen

(So I went on a trip!  I knew I was going to be spending a lot of time in a car, not driving, so I took five books along, thinking that I would get a ton of reading done.  Ha ha.  I read about 150 pages of this book, and no others, in 5 days.  It was pathetic.  Every time I opened it up, I fell asleep.  (This is not really the book's fault, as I was not getting enough sleep and driving usually makes me sleepy anyway!)  I'll tell you more about the trip at the end, since it did feature some bookish goodness, but for now, it's on to the plague...

This is such an intriguing title; I've been looking forward to reading this book for quite some time.  But I was quite disappointed!  Rosen is analyzing why the Roman Empire fragmented, while the somewhat similar Chinese Empire stayed in pretty much one piece.  He posits that among other often-discussed factors, the arrival of the first waves of the bubonic plague in Constantinople and environs in 541-2 weakened the whole population just as new populations were pressing in (first the Goths, then the newly-converted Muslims).

This is a fascinating premise!  I want to read all about this!  But it took until two-thirds of the way through the book for anybody to actually come down with the plague.  There was so much in the way of background-setting and digression that I felt like I was...oh, say, slogging through underbrush trying to find a creek, but only ever finding new patches of brambles to shove aside.  First we had to set up the Roman Empire, complete with the establishment of Christianity and the east/west split.  We founded Constantinople and discussed trade routes.  We got through Justinian's youth, which involved his entire family background along with his uncle Justin, and a good deal of Byzantine politics, especially the chariot racing gangs.  Justinian ascended the throne and did a lot of stuff, and so did Theodora, whose background was examined in detail.  OK, now it's time for the plague!

No, it is not.  Now it is time to talk about fleas and various species thereof.  And a good long section on bacterial evolution and where Y. pestis came from (fascinating!  but by now I am tired and grumpy!), and exactly what Y. pestis does to a flea, and how rats come down with plague and humans are kind of incidental to the whole thing.  And the precise course of the bubonic plague through a human (again, fascinating but it's too late, I'm officially annoyed).  But now it's time for the plague, right?

Well, really it's time to discuss a lot of military campaigns in Italy, and just what the Goths thought.

There is hardly any plague in this book.  By the time it does show up, everything is murky and enmeshed in a zillion digressions (like what some guy said in 1880).  The effects of the plague are not as clear as they should be.  The whole thing comes off as patchy and way too digressive, without focus.  I was disappointed!

There is a lot of neat stuff in here.  I want to like it and recommend it.  But I don't.

I want to tell you about my visit to the Huntingdon Library in Pasadena, because it was quite booky, but I don't feel like it's enough to merit a whole post.  I was gone for days doing family stuff, and we also went to this fabulous museum I had never been to.  (I haven't made it down to LA in years!)  The Huntingdon is this massive estate full of fabulous gardens -- we visited the cactus garden, which looks like a set from Star Trek, and the Japanese garden -- museums of famous paintings, and a library of fabulously valuable books.  It is in fact quite difficult to do research at the Huntingdon, you need a lot of credentials, but they have museum displays for us peons.  I saw letters from Jack London, Lincoln, and Sir Isaac Newton!  And the BOOKS.  Enjoy these photos!