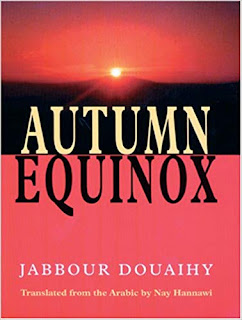 In Lebanon, in the mid-80s, an unnamed young man writes in his diary.  He has studied in the US and sometimes writes to the girl he met there, but since he doesn't know her address and she can't write to him anyway, he's sending his letters into a void.  He has no job.  He's trying to improve his life -- he makes his mom and sister sit for three formal meals a day, throws out nearly all his books, and practices sitting so that he'll look confident.  All summer, as violence simmers under the village's ordinary life, he makes strange attempts at normalcy and writes about his life and his relatives, and his diary ends on the autumn equinox.

This is kind of a quiet but odd little novel, and although it's set in the middle of the Lebanese civil war, that war only breaks in to the story a few times.  The diarist seems like an ordinary young man at first, but his actions get stranger as the summer goes on.  Various quotations I liked:


I sometimes think that since we've laid down our arms and made peace with our enemies, Uncle Mansour lives only to prove his suspicions that life is a series of ambushes.  I don't think he's totally wrong about that.

What she also doesn't know is that I have to finish my project before the autumn equinox arrives, when the orange glow is only a harbinger of the end, and my willpower dissolves, and I become weak and unable to act or make any decisions. Anyway, I think that my mother and sister have been whispering about my change in behavior and has been hoping to marry me off as soon as possible.

...and the others have their own lives, which no one can penetrate, whereas I'm wide open, useless; I watched The Great Gatsby once, and it haunted me for a decade.

That's how I've spent the time, trying to find the perfect way to sit, one which would gather me around myself to be tenacious, alert, and handsome.

I spent yesterday afternoon trying to classify my books. First I set aside the detective novels because they don't leave any room for secrets, and then the modern poetry books because they make a religion out of a secret.

My mother says the signs of winter are beginning to show. I don't care about that because I've completed my plan, and here I am, clean and elegant. My life is smooth and organized. I don't fear the rain or anything else.


This was an intriguing short novel that I enjoyed pretty well. It does make me want to try more Arabic literature, so there you go.
20 books of summer Middle Eastern literature