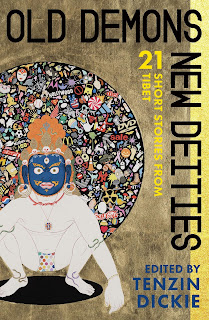 When I saw this cool collection of Tibetan stories, I knew I had to have it and read it for my world project.  I guess Tibet is not currently considered to be a 'country' since its annexation by China, but so what, we'll count it anyway.  When I was in college, "Free Tibet" stickers were everywhere; do people still have those?

The blurb gives some good information so here it is: The first English-language anthology of contemporary Tibetan fiction available in the West, Old Demons, New Deities brings together the best Tibetan writers from both Tibet and the diaspora, who write in Tibetan, English and Chinese.


The stories are varied: set in Tibet (pre- and post-occupation), or in various diaspora locations, such as India, Nepal, or Bhutan.  They are about all kinds of people and their struggles to survive or to be accepted, and a lot of them explore how Chinese occupation and exploitation has damaged or just plain destroyed Tibetan society and people.

I enjoyed this line from "The Season of Retreats," by Tsering Namgyal Khortsa:


...then the monk told him that it was quite hard to come across normal, functioning people in the decade that he had been in the West.  "Relationships and mobile phones," the monk said, "combine these two and they make people completely crazy."

I love the cover, which shows a traditional sort of design of a masked person in front of a background that, when you look carefully, is a mosaic of modern life, with logos, symbols, and cartoon characters all squished up together.

This is a valuable collection that I enjoyed reading.
20 books of summer Asian literature read around the world short stories