Everything Happens As It Does 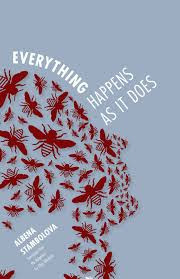 Everything Happens As It Does, by Albena Stambolova, trans. by Olga Nikolova
Published in 2002, in English in 2013, winner of 2013 Contemporary Bulgarian Writers Contest

Now that Bulgarian Literature Month is almost over at GLLI, I can publish my post here.  Head on over to see what's been going on before it's all done!   Thomas has been doing a great job.

Albena Stambolova, originally from Sofia, is a psychoanalyst and writer.  She lived and taught in Paris for some years in the 1990s, but returned to Bulgaria and won recognition with this, her first novel.  Since then, she has published two more novels, as well as essays and short stories.

Everything Happens As It Does is something of a mosaic whose pieces, some not visibly related, eventually go to make up a complete and satisfying pattern.  We follow characters who then disappear for a while as others take the stage without warning, and we are left to draw connections between them.  Everyone seems to carry echoes of fairy-tale figures, and that is especially true of the women.  I remembered many different tales, from "The Snow Queen" to "The Crane Wife," and even Millions of Cats.

Stambolova's style is simple and direct, full of plain statements, but with a good deal of substance under the surface.  She describes the unusual in the same tone as the everyday, so that it all blends, and we understand that the humdrum world is in fact full of strangeness.  Her descriptions are visual and refreshingly unusual.


This story considers itself the story of everyone.  I don't know if this is true.  You will be the one to decide.
I myself am certain that all stories are love stories, so I have refrained from classifying it as such.
It is simply the story of women and men who are mothers and fathers, sisters and brothers, loved ones and friends...or, in a nutshell, or people who are tigers and lions, oranges and lemons.
This story is neither funny, nor sad.  It is simply a story that takes place somewhere on the border between the world we know and the world we are no longer very sure about.

I actually read this book in one sitting, something that I haven't done in many years; my reading time is normally very fragmented.  It so happened that I had driven some kids to a dance in another city and had a few hours on my own, so I took myself out to a sandwich and then spent most of the time reading.  This novel is quite short at 120 pages, and I finished it just as the dance was ending.  It was a wonderful and unexpected opportunity to be able to immerse myself completely in the story and just not come up for air.