By Jean - November 19, 2017
It's Something on Sunday, Jenny's weekly event wherein we share a few things that got us through the week.  And what a week it was, hm?  Mine was made even better by wrestling with medical insurance for a few days, but it seems to have ended up okay.  We hope.  I'm officially ready to move to Finland now.  Anyway, here we go:

Every year, our county's literacy service holds a trivia contest for its fundraiser.  Each team has three members, and there are three rounds of progressively more difficult questions.  I've been on a team for, I think, five years now, and Friday was the day.  The competition was tight, and came down to a difference of just one point for the first place winners; then there were two sudden death rounds for second and third.  We took third place and got bronze medals to put next to our two previous golds.  (Actually, it doesn't matter that much who wins...as long as it's not the DA!)  It's neat to see people get together to benefit the literacy program. 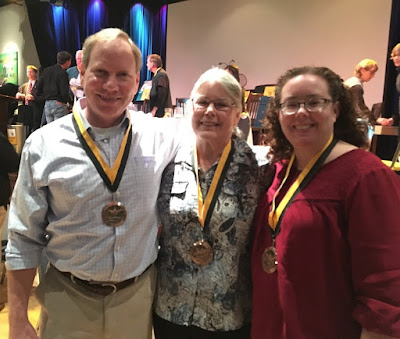 A little while ago I had so much fun with reading Christine de Pisan's Treasure of the City of Ladies that I decided I wanted a picture of her in my home.  We found a high-quality scan of this portrait of Christine writing in her study and got it printed.  At the same time, I refreshed a different literary portrait; years ago, when I read a biography of James A. H. Murray, first editor of the Oxford English Dictionary, we scanned and printed a photo of him, and I framed it.  By today's standards, that picture was of pathetic quality, so we found the same photo and had that printed too.  It was all very cheap and now I have two nice little pictures on my wall. 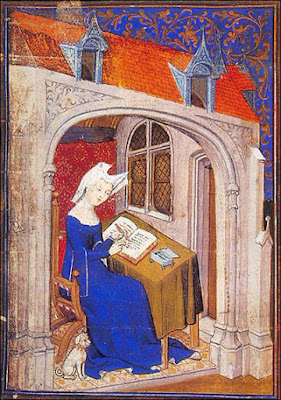 Last night was my college's Big Game with its archrival.  I care less than nothing for football, but once upon a time, Cal had a moment of Big Game glory.  It was in 1982 and we've been living on it ever since.   The Play is dear to all Berkeley hearts, even ones that really kind of hate football, and somebody made a Lego version for us all to enjoy.

Another video for you: way back in the early 90s, there was this local band/singer, Spencer the Gardener.  I think he's still around, and now sings mostly about organic food.  I can't explain quite why, but rainy weather (as we had one day this week) always puts me in the mood for Spencer, and I listened to him while I was driving around.  I pulled up this really very amateur video for a favorite song, and was amazed at how relaxed and groovy and happy this is.  Serious question: could anybody even produce something like this today?  Watch and tell me what you think!