Merlin and the Grail 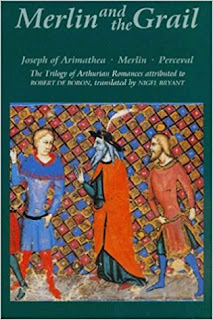 Merlin and the Grail: Joseph of Arimathea, Merlin, Perceval, by Robert de Boron

It's Witch Week!  The focus this year is on Arthurian literature, a favorite of mine, and so I read Merlin and the Grail, which I've been saving up for a treat.  This one was new to me, and I found out that it's an important piece in the Arthurian jigsaw puzzle, so read on.

We don't know much about Robert de Boron, but he was writing right after Chretien de Troyes, around the 1180s, and he was the first writer to write the Arthurian cycle -- the whole story from beginning to end.  He managed to smush the important elements into just three tales (two, really), and he added a whole lot as well with Joseph of Arimathea.  He also converted the Grail into an overtly Christian relic. Chretien had a Grail that was a kind of platter, which served a host, and there was a spear dripping blood; these were obviously Christian allusions.  Chretien's audience would have immediately thought of that spear as the famous lance of Longinus, and of the Grail as serving communion, but it was not made explicit.  Robert changed the Grail into the vessel used at the Last Supper and then for the blood of Christ, and he comes right out and says the spear is Longinus'.  So wow, this is important stuff!  Just think, without Robert, maybe there wouldn't have been an Indiana Jones and the Last Crusade.

Joseph of Arimathea is entirely Robert's invention, and gives us the backstory of the Grail, starting with the life of Christ.  After his resurrection, Joseph is imprisoned and Christ appears to him, explaining how Joseph will be the guardian of the Grail and needs to have companions.  A little community of believers is established, and from that come the "rich Fisher King" and his descendants, of whom Perceval will be one.  (Robert even tries to provide an explanation of the name and idea of the Fisher King, but the Fisher King comes from Chretien, who doesn't explain it, and who may have gotten it from older Celtic myth sources such as the Mabinogion.)

Merlin is largely sourced from Geoffrey of Monmouth's History of the Kings of Britain, which has a long section on Merlin and includes a book of Merlin's prophecies that was popular all on its own for centuries (like Nostradamus).  Robert elaborates heavily on Geoffrey's tale.  Merlin is the son of a demon and a devout maiden; as half-demon, he knows all the past, but as a saved Christian, he is given even more power by Christ and knows all the future, plus plenty of magic.  Merlin helps Vortigern with building his tower, and then goes on to advise future kings.  He builds Stonehenge and arranges for Utherpendragon to establish the Round Table and trick Igerne, and he fosters out the infant Arthur.  Finally, Arthur takes the sword from the stone and is proclaimed King through Merlin's help.

Robert's Perceval has a similar beginning to Chretien's, but he is not so blatantly innocent and clueless.  Indeed, this Perceval messes up on a regular basis and does all sorts of fairly awful things.  He goes to see his grandfather, the Fisher King, and fails to ask the questions, so he's doomed to spend years questing around trying to find the castle again.  Unlike in Chretien (whose tale is unfinished), Perceval does find it again and does ask the question, healing his grandfather.  But that's not all: there is also a lot of Arthur in this story, and he goes to conquer France and then Rome.  While he's gone, Mordred takes over, so we get the final battle as in other stories, though without Lancelot and Guenevere.

An interesting detail about Arthur's fosterage is that Sir Entor (Ector, as we usually know him) gives Arthur a reason for Kay's bad temper.  Merlin had stipulated that Entor's own son be put out to nurse, while Arthur would be nursed by Entor's wife:


Entor said to him that if he became king he should make Kay his seneschal; and that Kay should not lose that office no matter what wrong he might do.  "If he's ever wicked or foolish you must bear with him, for whatever faults he may have came to him only from the woman who nursed him -- and it was on your account that his nature was changed."

Arthur actually refers back to that at one point when Kay is being a jerk.

The combats can get pretty gruesome, as here with Arthur vs. King Floire of France:


With sword clutched tight in his right hand he dealt a blow upon Arthur's shield, splitting it and hacking off a great piece; so mighty was the blow that as it flashed down it smashed three hundred rings from Arthur's mailcoat and cut into his thigh, taking with it a handful or more of flesh, and down it came still, severing a spur and three toes from his foot before it plunged a full yard into the earth.

Robert always keeps in mind that his work is to be read aloud.  It was written in octosyllabic verse, which I gather looks kind of clunky on the page, but (so says the editor) when spoken aloud, gave wonderful opportunity to infuse emotion and drama into the words.  He says that Robert's writing often been derided, but it must be spoken aloud to be appreciated.  (I wouldn't know, since I can't speak Old French.)


I'm so happy I found this book; I enjoyed it so much.  I love figuring out these little bits and pieces of the story.  Originally I was looking for the rest of the prose Lancelot, which The Quest of the Holy Grail is part of, but apparently it's only found in a massive ten-volume edition, with each volume costing over $30.  So that's pretty depressing.  I haven't even been able to ILL it.  But I did find this, and the Perlesvaus, so that is a good deal of consolation.