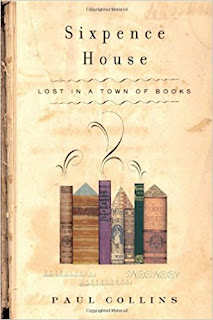 Sixpence House: Lost in a Town of Books, by Paul Collins

Years ago -- probably over a decade -- a good friend of mine told me that I really ought to read this great book about a town of books.  I filed it away in my head, and I did kind of mean to read it, but also...books about the greatness of books aren't always my cup of tea, so I wasn't sure I wanted to read it.  Anyway, eventually a copy came into my hands through no effort of my own, and I figured I would read it.  But here's the funny part: if I'd realized that Sixpence House was written by the same guy who wrote Banvard's Folly, I would have gone right out and gotten it.  I loved Banvard's Folly, and if you haven't read it, you should!  So my skepticism just stopped me from enjoying a pretty good book for over 10 years.

This is a sort-of memoir of the months that Collins, his wife Jennifer, and their toddler son spent in Hay on Wye, the little town on the border of England and Wales that specializes in old books.  Hay has a whole lot of used bookstores, a festival, and just generally piles of old books everywhere.  Collins winds up sorting American literature for the self-appointed King of Hay, Richard Booth, whose idea it was in the first place to make used books the hallmark of Hay.  The little family would like to stay, but finding a house (such as Sixpence House, a former pub) is next to impossible.  Meanwhile, though, life in Hay is full of eccentric people, intriguing little incidents, and huge numbers of books, some of which are worth reading.

So I wound up having a lot of fun with this book.  Collins is witty in a way that I really like; he is fascinated by weird little corners of history, and, well, he's just lovely to read.  I was over ten years late in reading the book, but it was worth the wait.
memoir/biography