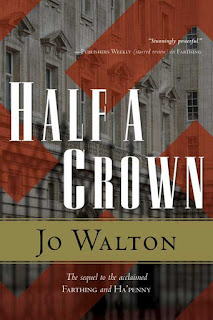 Half A Crown, by Jo Walton

This must be the longest, most put-off mystery trilogy in the history of my reading.  I really liked Farthing years ago -- pre-Howling Frog -- and then, a few years later, discovered the existence of Ha'penny and enjoyed it too.  I then got hold of a copy of Half a Crown, but I got maybe a third of the way in before stopping because it was getting so tense.  I kept meaning to pick it back up...and now, five years later, I've done it.

It's 1960, a good ten years after the events of Ha'penny.  Fascism is well entrenched in Britain and the Axis rules the world.  Carmichael is now commander of the Watch, which is really the British Gestapo.  He is good at his job and nicely blackmailable, but he's also secretly using Watch resources to help Jews escape to Ireland.  When his ward, Elvira, is accidentally caught up in a street riot and arrested on the eve of her debut in London's social elite, everything threatens to unravel.

All this is going on as a massive peace conference is about to take place; Hitler and Japanese officials, and the doubtfully loyal Duke of Windsor, are all descending upon London, and Carmichael finds himself trying to foil a possible coup -- thus defending the rule of his hated dictator....

Most of the story is told from Elvira's point of view, and she is both sympathetic and clueless.  Brought up to be a proper fascist debutante, she hasn't really got a clue.  Meanwhile, Carmichael is walking this tightrope where he tries to figure out how much he can get away with while simultaneously feeling himself erode away, one compromise at a time.  I understood why I put the book down the first time; the tension gets to be unbearable and I had to make myself keep going in the hope that the resolution would be worth it.

Happily for me, the resolution is worth the read and I'm glad I finished the trilogy, even if it did take me about a decade to do it.  The Small Change Trilogy is excellent.