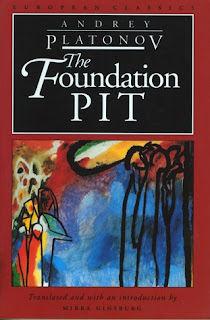 The Foundation Pit, by Andrei Platonov

I've had this novel floating around on the edges of my mental TBR list for years, and last year I acquired two different translations of it -- my brother had them.  I eventually chose to read the Mirra Ginsburg translation on the rationale that I have previously read her translation of Zamyatin's We, and I have a couple of her picture books; she has worked a lot with Jose Aruego, whose work I love.  So Ginsburg it was.

Platonov was a Russian writer of the 1920s and a disappointed Communist.  He wanted a world where people shared willingly with each other (as in the days of early Christianity) and he got oppression and violence.  When he wrote about his disillusionment, he was of course banned, and he then remained a pretty obscure writer for a long time.  Long after his death, he was 'rehabilitated' and eventually venerated.

Voshchev, fired from his factory job because of his overly-thoughful habits, walks down the road until he comes to a town where everyone is working on digging a foundation for a huge 'general' building, where everyone will live happily and in silence.  He joins the work crew, but every time they think they've gotten the pit large enough, the engineer decides it had better be larger yet.  Everyone is working hard, but all they ever get out of it is a hole.


Everything surrendered itself to unquestioning existence, Voshchev alone was apart and silent.  A dead, fallen leaf lay near his hand, brought by the wind from some distant tree; now this leaf was destined to find peace in the earth.  Voshchev picked up the dry leaf and hid it in a secret compartment of his sack where he collected all sorts of lost, unfortunate objects.  You did not know the meaning of your life, Voshchev thought with careful sympathy.  Lie here; I'll find out why you lived and died.  Since nobody needs you and you are lying uselessly in the middle of things,  I will keep and remember you.

A country clock hung on the wooden wall and ticked patiently, worked by its dead weights.  A pink flower was painted on its face to give cheer to everyone who looked at the time.  The workmen sat down in a row along the table.  The mower, who did woman's work in the barrack, sliced the bread and gave each mana piece, adding a chunk of last night's cold meat.  The workmen began to chew earnestly, ingesting the food as a duty, but not enjoying it.  Although they had knowledge of the meaning of life, which is equivalent to eternal happiness, their faces were gloomy and emaciated, and instead of peace they showed weariness.

We get to know several of the workers, and a little girl, Natasha, whose mother has died.  There are few children here and she is the hope of the future for all of the workers, but despite all their love and care, she dies, taking the dream of Communism with her.

It's a surrealist and tragic novel; strange things happen and it doesn't necessarily make sense, but then the Five-Year Plan was like that too.

Although it's short, it's not an easy novel to read.  I won't claim to have understood it very well, though I did like it very much.  It's one to work up to, and then to read several times over a lifetime.