The Durrells of Corfu 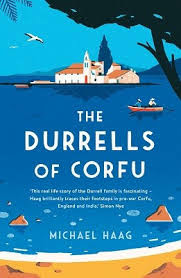 The Durrells of Corfu, by Michael Haag

Hey folks, I have missed blogging so much lately!  I had a tiny little finger surgery (the most minor ever) a couple of weeks ago, and I thought I would be able to write again after a couple of days off.  Ha ha.  This is the first time I've felt capable of typing properly; I've been able to write the odd comment here and there, but first it hurt too much, so I would type funny to accommodate, and then I could hit the keyboard, but the big ol' bandage meant that I always hit more keys than I meant to.  Either way it was a huge hassle and I just didn't try very hard.  I also got sick with a nasty bug, so I forgot about a lot of my more ambitious reading plans and just read straight through most of the Anne of Green Gables series.  Even so, I now have a pile of books to write about, and I thought about doing a large multi-book post, but with two or three countries represented, I just can't.  I want individual posts for the Reading All Around the World list, and thus I shall just take my time....

Well.  I have probably mentioned many a time that one of my all-time favorite books is Gerald Durrell's My Family and Other Animals, and I've tried to collect as many of the rest of his books as I can.  The rest of the world has caught up with me, and there's now a TV series about the Durrell family adventures on Corfu; so far I've only seen a couple of episodes, but it's pretty fun.  And to top it off, Michael Haag wrote a book explaining the family's background, how they ended up on Corfu, and approximately what actually happened there.  An old buddy of mine actually moved to the island of Jersey a little over a year ago, and he told me about the existence of this book (since I kept bugging him about reading the Corfu books).  Thanks, dude!

Haag puts in a lot of great family background.  The Durrells were originally an Anglo-Indian couple; Louisa grew up in India and it was her home, and that was where the children were all born.  It was the tragic early death of Mr. Durrell that precipitated their departure and nearly wrecked Louisa; they moved to England and were miserable for a while before Larry suggested moving to Corfu as a cost- and sanity-saving measure.

My Family and Other Animals puts a comedic gloss on all this stuff, and renders the other siblings as caricatures more than as human beings, so I liked finding out more about who they really were.  Gerry messed around with events, people, and the entire timeline quite a lot; he never mentions, for example, that Larry was married at the time and mostly lived in a different house, and he erases Theodore's wife and daughter (one of his best friends) completely.  Some events actually happened to other people, and he just lifted them; it was a family habit anyway.   The nice thing about Haag is that he loves this family, too, and manages to tell us a more accurate version of history while refraining from ripping our dreams to pieces.

Haag also includes plenty of information on what happened to everybody afterwards (something I always want to know!).  Gerry ignores history and implies that the family moved to Corfu on a whim, and then left again the same way, but in fact it was the war that forced them to leave -- at various times.  Some of them only barely got out.  We get to learn about everybody's war experiences and what happened after that, and it's often great stuff.  Larry moves around a lot and starts writing in the big time (someday I have really got to read some of his work).  Margo has a lot of extremely exciting war adventures and hosts Gerry while he writes his book to fund a zoo.  And Leslie, well...poor Leslie has a bit of a difficult time.

For Durrell fans, this is a book worth reading.  It mostly won't ruin your dreams, and it's got plenty of interesting information that rounds out the people you know -- and they benefit from it.  If you have never read My Family and Other Animals, or at least seen the TV show, then you have no business reading it and have some other reading to do first.
English literature history memoir/biography