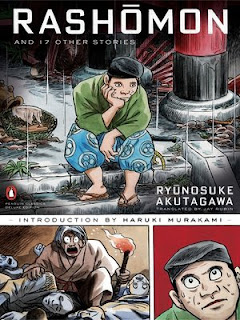 Rashomon, and 17 Other Stories, by Ryunosuke Akutagawa

Akutagawa is one of the great modernists of Japan, so when I came upon this very neat Penguin edition of his stories, I snapped it up.  (I have a small pile of Japanese classics to get to...)  Isn't it fun looking?  The 18 stories are arranged by the chronology of their settings, so first there is a set of stories set in the Heian period (which ended in 1185), then several in the Tokugawa Shogunate (1600 - 1868), and finally a few set in Akutagawa's own early 20th century.  A final set of pieces are semi-autobiographical, fragmenty sort of things that often reflect Akutagawa's struggle with his mental health.

Since most of us have heard of Kurosawa's film Rashomon, the two stories that inspired it are first in the collection.  One story only contributed its title (the plot is illustrated on the book cover), and the second, "In a Bamboo Grove," is the actual source of the murder mystery shown in the film.  My daughter and I really liked Throne of Blood last year, and now our ambition is to watch Rashomon too, so I haven't seen it yet.  The other Heian-period story that I liked best was "Hell Screen," which is quite the shivery tale.

I liked all three of the Tokugawa-era stories, two of which were about the government's persecution of Japanese Christians.  The other was a tragic story of a young lord's insanity and his retainer's dilemma.

Two of the stories in modern settings were ghost stories, and I liked "The Story of a Head That Fell Off" best.  The autobiographical pieces were sad and somewhat confused.

I believed that I had committed every sin known to man, but they went on calling me "Sensei" whenever they had the chance, as if I were some sort of guru.  I couldn't help but feel in this the presence of something mocking me.  "The presence of something"?  But my materialism could only reject such mysticism.  Just a few months earlier, I had written in a small coterie magazine: "I have no conscience at all -- least of all an artistic conscience.  All I have is nerves."

I enjoyed reading most of these stories, and I'd like to get hold of the short novella "Kappa" someday; it is not included in this volume.  Most of these are not too hard to understand, so compared to many longer or more difficult works of Japanese literature, these are pretty good if you're looking for a good introduction.  Several of them are also standard classics that most students read in school.
20 books of summer Asian literature read around the world short stories