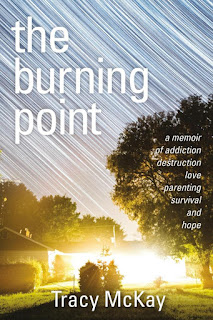 The Burning Point: A Memoir of Addiction, Destruction, Love, Parenting, Survival, and Hope, by
Tracy McKay

First, I want to tell you that this is a truly well-written book.  Tracy McKay can write, people.  Even if you're not a parenting/tragedy memoir sort of person, take a look at Tracy's writing, because wow.  (I have a link to the first chapter at the end of the post.)  I am completely unable to tell you how really good this memoir is; it's not sensationalistic or angry, it's just honest and insightful and true.

The Burning Point starts with Tracy's moment of decision, when she knows it is time to get out.  Her husband, once a wonderful and caring man, has been spiraling down in the grip of his drug addiction  long enough, and she takes her three small children and leaves.  From then on, Tracy weaves together the story of how she survived the divorce, poverty, and attendant difficulties with flashback sections of her relationship with her husband.  A few particularly harrowing scenes are written in third person.  And, she also writes some wonderful stuff about her middle child, who has autism, and about his challenges.

Tracy writes with great (and hard-won) insight; anybody could learn some things from her.  The really amazing part, though, is how she writes about her former husband, with no bitterness at all.  Of course she was angry at the time, but she describes that and then how she figured out that she had to forgive if she was going to be the person and the mother she needed to be, not to mention for the sake of her children.  It's pretty stunning.

A few of these scenes were familiar to me from reading them on Tracy's blog back then, which I particularly remember because I had a real-life friend going through a nearly identical situation at the same time.  Just for that, it was nice for me to be able to read the whole story and see her come out the other side, which my friend also did.

I read the whole book in one day, on the Fourth of July, in between other stuff.  Once I started, I couldn't put it down unless I had to.  You can read the first chapter here.  I do advise you to do so, but I also warn you that you will promptly find it necessary to buy the book to find out what happens.  Kindle for choice, because then there's no wait.

In other news, it seems like my whole state is on fire this week.  We have a wildfire up here that has gotten some homes -- it's nowhere near me; in fact it's the very same area that was evacuated a few months ago when they were afraid the dam's spillway would fail.  They're calling 2017 the year of hell and high water now.  And a week ago, I was in my hometown, enjoying the cool coastal breezes, but now there's an absolutely huge wildfire up in the hills there.  My friend says they can see the flames from town now, and it's snowing ash.  Orchards and ranches are burning.  It's been pretty awful, and there are plenty more wildfires right now.  It's going to be a rough fire year.
memoir/biography non-fiction