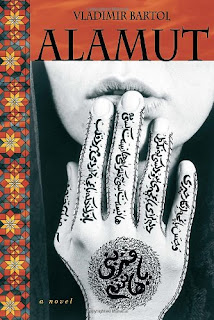 This book has so much backstory and explanation involved that I feel like I'm going to bore you stiff -- except that it's all so interesting!

In the 1930s, Vladimir Bartol wrote this novel, which was a pretty weird novel by the standards of his day and thoroughly annoyed his fellow writers.  Bartol was Slovenian, and the fashion was to write realistic portrayals of the struggles of Slovenians.  It certainly was not to write long, elaborate, highly-researched historical novels set in 11th-century Persia that were in fact kind of allegorical meditations on the rise of fascism across Europe.  But that is what Bartol did, and then he wanted to dedicate his book to Mussolini; but his publisher talked him out of doing such a dangerous thing.  Although nobody quite knew what to do with Alamut at the time, it became a beloved classic to Yugoslavians and then to the rest of Europe, but was only translated into English in 2004.  It even inspired the Assassin's Creed video game series (which I know virtually nothing about).

The historical root of the novel is taken from the life of Hassan-i Sabbah, who really did take over the fortress of Alamut in 1088 and was a famous leader in the Ismaili sect of Islam (a splinter group of Shia).  He trained elite soldiers called Hashshashin, or as you know them, assassins.

OK, now we can get to the actual plot of the novel, which has two main threads.  We have Halima, a young teenage girl sold into slavery and taken to a mysterious, beautiful garden, where she lives with other girls and is rigorously educated.  Then there is Ibn Tahir, a teenage boy whose father orders him to go become a soldier at Alamut; he is educated to be a fedayeen, an elite soldier who will fight for the Ismaili cause (that is, against the Seljuk dynasty in Persia and anybody else their leader Sayyiduna considers an enemy).  Eventually, Sayyiduna's plan becomes clear; he cultivates fanaticism in his soldiers, and feeds them on dreams of attaining Paradise upon death.  He 'proves' the reality of Paradise by allowing a select few achievers to actually visit, aided by careful drugging, where they meet enchanting houris living in a fantastic garden.  Thus the fedayeen become entirely willing to carry out dangerous political assassinations....


All on its own, it's a novel of adventure and pathos, rooted in Persian history.  But really, the reader needs to be thinking about Bartol's world and the rise of several flavors of totalitarianism, the nature of fanaticism in human nature, all sorts of things.   It's quite a novel, and would repay more than one reading.


20 books of summer Eastern European literature read around the world