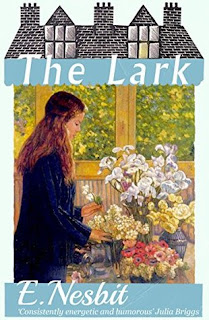 The Lark, by E. Nesbit

I'd never heard of this novel by E. Nesbit until it started making the blog rounds several months ago.  It's not a children's story; it's more for adults or adolescents.  Perhaps it would have been a YA novel if such a category had existed 100 years ago.  Anyway, I've always been a big Nesbit fan, so I was excited to see this book, and it's so easy to get, $3 on Kindle.  Even I, cheap as I am, am willing to shell out $3 for a Nesbit book I've never read.

Cousins Jane and Lucilla have spent the entire Great War sequestered away in school, despite being quite grown up by the end.  Now, in 1919, their guardian has finally sent for them to leave school -- only for them to find that he has lost nearly all their money, and having scrammed out of the country, has left them with a cottage and 500 pounds to live on.  Jane firmly announces that this whole thing is going to be A Lark, and they set out to earn their living.  Next thing they know, they have their eye on a much larger house in the neighborhood, they've made friends with half the village, and they're getting into awkward scrapes with regularity.

This story has several standard Nesbit features; like the Bastables and the railway children, Jane and Lucilla are very ordinary girls with distinct personalities.  They meet and make friends with ease, frequently tromping in where anyone else would fear to tread.  They come up with oddball plans that mostly don't work, and they get into terrible pickles even when trying to do their best to do the right thing.

The difference is that Jane and Lucilla are not children any more, though they almost are; having missed the war, they are fresh and naive, lacking the tragic experiences that every other character has had.  These are all adults, pretty much, and they have adult problems to deal with.  But they try to meet everything with a sense of adventure and fun, and that makes the book a lovely pleasure to read.

If you're a Nesbit fan, or an Anglophile, you should definitely get hold of The Lark.  It is just wonderful fun.
English literature