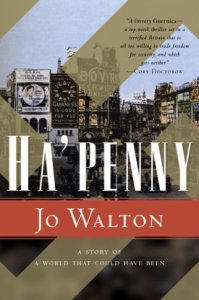 I found out from Jordan that Jo Walton had written a trilogy.  I enjoyed Farthing a few years ago, but hadn't realized that there were two more books.  I thought Farthing was great, so that was good news.

The Small Change Trilogy is a cozy-mystery series set in an alternate-history Britain, one that made peace with Nazi Germany in 1941.  Eight years later, the Western world is falling into an abyss of fascism, and Britons are largely apathetic, willing to blame communists and Jews for everything.  People have heard stories about the camps, but mostly refuse to believe them  Germany is all-powerful in Europe and still at war with the USSR.

Carmichael is the link between the three stories.  He wants to be a decent man, but he's picking his way through a minefield of anti-Semitism, official fascism, and blackmail from his superiors, who know about Carmichael's own unapproved lifestyle.  He's losing himself.

The story is narrated from two alternating points of view--Carmichael's and Viola Lark's.  Viola is a London actress who is about to star in Hamlet, and one of 6 sisters who are clearly modeled on the Mitford sisters.  They don't do exactly the same things, but it's darn close. It's a fun device, but I did think that after a while it got to be a little too much.

I really enjoyed the cozy-mystery setting mixed with the truly frightening idea of a victorious Nazi Germany.

It's a great book and trilogy, and I'm looking forward to reading the final installment, Half a Crown.
Posted by Jean at 12:53 PM

Sounds intriguing. I'll have to check it out.