The Skies Belong To Us 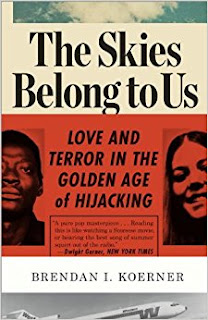 The Skies Belong To Us: Love and Terror in the Golden Age of Hijacking, by Brendan I. Koerner

This has been on my wish-list for quite some time, and I finally got tired and ILLed it.  Oh, it was so fascinating!  I learned a ton.  Koerner gives a general run-down of airplane hijacking history in America and focuses in on one particular and intriguing case, along with some large dollops of relevant current events.

People, America in the 60s and 70s was kinda unhinged, at least where hijacking was concerned.  Airplanes were interesting, a symbol of power and the future, and there was no security whatsoever.  Passengers didn't have to go through any kind of procedure at all -- they didn't even have to show ID.  Once people figured out how easy it was to gain national attention and power, however fleeting, by hijacking a plane, a lot of them decided it would be a good way to solve whatever problems they had.

A fun fact I learned: one of the very earliest hijacking attempts actually occurred right here in my hometown, in 1961!  The guy was drunk and tried to force the pilot to take him to his hometown in Arkansas, but the plane was still on the ground and he was captured instead.

Most early hijackings followed the examples of those in other countries and involved forcing the plane to go to Havana.  People thought that they would be greeted as heroes and live great lives in Cuba.  Castro was happy to accept hijacked planes -- he could demand ransom money for each one -- but the hijackers were invariably subjected to weeks of interrogation followed by either incarceration or the Cuban equivalent of the gulag.  Later on in the 70s, Castro got tired of taking in unstable and violent people, and stopped accepting planes at all.

Our featured hijackers are Roger Holder, a Vietnam vet with serious trauma and a heavy drug habit, and his girlfriend Cathy Kerkow, who liked parties and shocking people.  Holder wanted to tell the world about the horrors of the war, and he constructed elaborate hijacking plans to broadcast his message.  He wanted to rescue Angela Davis, who was on trial, and take her to North Vietnam where they would be hailed as fellow fighters against injustice.  Angela would be grateful to him!

The actual hijacking didn't quite go as planned.  Angela Davis had no desire to be rescued.  Holder and Kerkow wound up in Algieria, guests of the International Black Panthers (Eldredge Cleaver and some friends), which sparked a short run of hijackings to Algeria now that Castro was no longer accepting anybody.  From there, they eventually went to Paris.   Koerner follows Holder through the rest of his tragic life, but Kerkow is more difficult; she thrived in Paris, and engineered a disappearing act in which she probably switched identities and just merged into the background.

I really had a lot of fun with this book, especially with learning about hijackings in general.  There is all sorts of weird stuff in here.  Anybody interested in recent history would probably enjoy it.
history