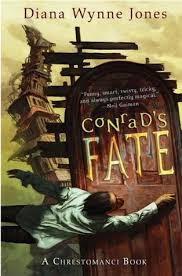 Today we're talking about Conrad's Fate, a story I just love.  We have Conrad, a great narrator who has to figure out that he's been lied to his whole life, and get to see more of Christopher and Millie before they grow up.  I would have been perfectly happy to read endless adventures of Christopher, Millie, and assorted friends, but DWJ was not that kind of writer.

One character I both love and cringe at is Conrad's mother, who ignores everyone and everything in order to write books of academic feminism.  She is awful, sometimes in an over-the-top, funny way, and more so in a truly tragic way.  I suspect that DWJ was poking a little fun at herself here, magnifying the way all writerly mothers have to neglect other things in order to write at all.  Conrad's mother is not the usual hungry mother of DWJ writing -- that element shows up in the Countess -- but the way she utterly neglects her children and even succumbs to spells pushing her to forget them makes her just as bad in her own way.  She and the Countess are a pair.

And for today's question, Kristen asks:


If you were to discover a family secret, would you rather it be: a noble title, money, or magic?

Well, I don't know what earthly use I'd have for a noble title!  (Unless maybe it comes with a semi-ruined castle and lots of money for upkeep of said castle?)  Money would certainly be awfully useful, but magic would be more interesting.  I guess it would depend on what kind of magic it is.  Also, I'm a sucker for surprises, so I'd probably pick magic just to see what would happen.  I can never resist the unknown quantity -- at gift exchanges I never steal opened presents.  I invariably pick the most intriguing-looking mystery package, and usually end up with something dopey.  (I got dollar-store Tupperware two years in a row at the Christmas party, and it still didn't cure me!)  On the other hand, if I had lots of money I could take another trip to the UK and see Bristol this time....
DWJ Month