The Man Who Saved Britain 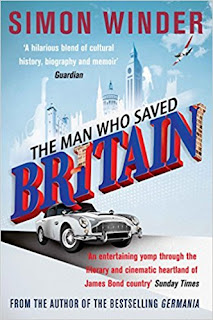 The Man Who Saved Britain: A Personal Journey Into the Disturbing World of James Bond, by
Simon Winder

Remember a month or so ago, I read and enjoyed Germania?  Well, I happened upon another, earlier Winder title at the public library, and I think it's pretty obvious that if you find a whimsical book about the cultural implications of James Bond, you have to read it.  At least, I do.

Here's the funny part, though: I've never been a Bond fan, and have not seen most of the older movies.  I don't think I've ever watched a whole Connery Bond movie, and I'm pretty sure the only one I've seen all the way through is the terrible Live and Let Die with Roger Moore (it's the one with Jane Seymour in).  I have seen some of the newer Daniel Craig films -- for some reason I've seen Casino Royale three times, why? -- but I haven't searched them out or anything.  I think Daniel Craig looks like a chimpanzee.  My Bond knowledge is therefore extremely patchy, to the point that I had not realized that Donald Pleasence's frequent appearances as an evil super-villain in some of my favorite B-movies stem from his role as the original blueprint evil super-villain in Bond films.  So I learned a whole lot about James Bond here -- more than anyone really wants to know.

Winder is about ten years older than I am and was the perfect age to grow up obsessed with Bond films, just like every other boy in the UK, despite the fact that by then Roger Moore had taken over the role.  He is therefore in a great position to have fun noodling around with ideas about what Bond meant to the collective British psyche, and proceeds to hop barefoot around the meadows of mid-century Britain with abandon.

In a nutshell, Winder's sort-of-thesis is that post-WWII Britain went into a tailspin of an identity crisis.  It was traumatized and out of money, the Empire was disintegrating, and entire industries based on that empire were evaporating into thin air.  In just a couple of decades, the UK went from a major world power -- one of the Big Three -- to a poor, kind of marginal country on the edge of Europe that had to beg to join the EU.  The fictional character of James Bond -- suave, worldly, sophisticated, and always superior to everyone he met -- provided a fantasy of British cool and importance, and even gave ordinary folks instructions on luxury goods and world travel.  Between Bond and the Beatles, we all think that Britain in the 60s was fantastic, and we have this vague impression that MI6 was doing important, amazing spy stuff.  It's not true, but it's a lot more fun than reality was.

Much of this book is very fun.  Some is pretty wince-worthy, what with the way Bond generally stomps all over modern mores.  And some is less fun.  I was often bothered by Winder's tone about his own country, which was very much in the self-hating British mode.  I don't mean that I didn't like that he had honest criticisms about his country's history and culture; I mean that he frequently came off as pointlessly mean or self-hating.  He got extravagantly disgusted about various points of British culture that aren't really worth getting all upset about.  It was neither enlightening nor entertaining, just kind of unpleasant.  And at one point he's really pretty vicious about the French for no reason that I can discern.

Still, I learned a lot and there are some very entertaining nuggets of anecdote, history, or story.  (For example, the Bond film director Cubby Broccoli was so named because his Italian market-gardening family developed broccoli in the first place.)  It was a worthwhile read.  And I liked this bit about Lego:


I never had quite enough Lego bricks to make more than a single Lancaster bomber and only that through roping in all sorts of implausible shapes which undermined any sense of documentary truth.  Lego then remained true to its relentlessly decent Danish roots and great care had been taken to use jolly colours and no shapes that could be construed as remotely weapony.  This was fine for the tots of Denmark, whiling away happy hours clicking together model nursery schools or yogurt factories, but in the murkier world of British childhood, where the crying need was for models of coastal gun batteries or V-2 launch sites, Lego bricks fell well short.

I think the image here is actually the UK edition.  The one I read features a smirking Connery and a stoned-looking girl wearing very little.  I actually stuck a post-it note over her in order to be able to read the dang thing!