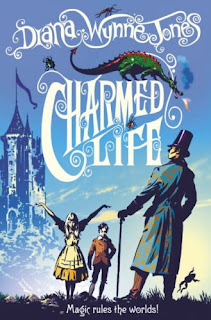 It's our first DWJ book, Charmed Life!  I had so much fun visiting Cat and the rest of the crew.  Kristen at We Be Reading says:


Many will see this story as a cautionary tale -- either about choosing carefully whom you trust or about telling the truth and not holding things back. If Cat had done any of these things, he wouldn't have already (unknowingly) lost some of his nine lives. I also think it's a tale about finding your place and your talents and embracing them. If only we all had the chance of our place being Chrestomanci Castle!


I do think it's about finding your place.  I'd add another thing -- it's about how growing up helps you to understand other people better and see them more clearly.  Cat clings to the people he knows because they're familiar, but as he grows, he learns to see them for who they really are -- and eventually he even manages to do something about what he sees, which is very difficult for him.  He is far too used to being passive, and a large chunk of his growing up is that he has to learn to be an actor, not an object acted upon.

And, since we are focusing on lives this month ...

Question of the Day: The reason an enchanter has nine lives is that he has no counterparts that existed or survived in the eight related worlds. Would you rather have nine lives all to yourself or eight living counterparts in the other worlds?

Oh, that's easy.  I'd much rather have eight counterparts!  Can I visit them?  Gwendolyn's case implies that I cannot, but I'd love to find out what their lives are like.  Maybe we could organize a merry-go-round of exchanges to see.  (This is exactly the same thing that makes me like high school reunions and Facebook.  I want to know how people are doing and what they're up to!)

And one death is quite enough for me.  Nine is eight too many.