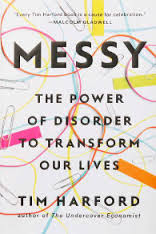 Messy: the Power of Disorder to Transform Our Lives, by Tim Harford

This was a pretty enjoyable, semi-light non-fiction read.  I am a messy person, and always trying to improve, so I wondered what Harford would have to say  However, this book is not an excuse for we messy housekeepers to slack off and stop trying -- he's talking about entirely different sorts of mess.  Which I approved of, because I don't need any convenient excuses to hide behind, and I already knew that being a not-especially-good housekeeper doesn't really do me any favors.

Nope, this book is all about messy circumstances -- the interesting, unexpected, and often brilliant things that can happen when a monkey wrench is thrown into the works of our nice neat plans.  Having our plans messed up, or being shoved out of our comfortable bubble zone, is something we are usually not too happy with.  It makes us anxious and angry.  But it also usually makes us sharper, as we are forced to think about what's going on and try to figure out a new direction.  Some of the greatest ideas, or music albums, or technology has come out of an unexpected situation that everybody hated being thrown into.

Harford brings out a zillion examples, from beloved music recordings produced under awful conditions to the incredible number of inventions that came out of MIT's hideous temporary warehouse, Building 20.  Even war and politics get a look in, as he analyzes Rommel's preferred tactic of causing chaos, figuring that his enemy would take longer to get oriented than he would, and Trump's method of enraging everyone and then changing the subject.

But how easy is it to plan a kind of messy that will lead to fortuitous meetings, brilliant improvisations, and exchanges of ideas?  Not all that easy.  Steve Jobs was only fairly successful at it (one dud of an idea was to put only one set of bathrooms in the whole place, forcing people to mingle outside of their neighborhoods), but he was a lot better at it than many.  MIT replaced Building 20 with a fabulous Gehry building that paid visual tribute to messiness but did nothing at all to actually foster it.  Trendy companies love to make their workplaces unusual, playful and stylish, but putting image over function usually backfires -- and the best work seems to come out of workplaces that let the employees decorate how they wish.  Trying to control and direct the messy (thus making it nice and neat) doesn't work at all.

TL;DR:  be willing to work with unforeseen circumstances and people you're not entirely comfortable with.  Great things can come of it.  Don't try to control other people's work or environment.  Just relax already and embrace the messy.