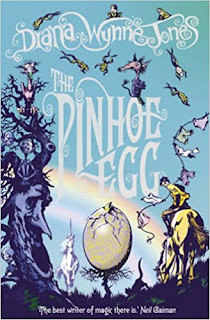 I've been having a lovely time reading all the Chrestomanci books; it's been a really nice respite for me.  The Pinhoe Egg is the last, and one of the best!  Kristen says she thinks it's one of DWJ's best books overall, and yeah, I think I'd put it in the top ten.  It's just so much fun -- she was really at the top of her game and you can see her doing all the great DWJ things, but a bit more so.  Marianne's village is full of interesting characters (almost none of whom are very good people), and I love watching Marianne and Cat solving problems together and becoming a team.


Question of the Day: There are three different kinds of magic in this story: enchanter magic, dwimmer (natural magic), and the hybrid tech-magic that Joe uses. Which kind of magic would you most like to have?

First, I'll note that the three nine-lived enchanters -- Gabriel de Witt, Christopher Chant, and Cat Chant -- have magic that differs completely from the others.  It's often stated that they don't really understand each others' talents.  Christopher has no interest in animals but loves cars and machines (see Conrad's Fate), and Roger seems to inherit that preference.  Cat is developing his talent for dwimmer, which is magic having to do with alive and growing things.   (DWJ seems to have really gotten into this idea toward the end of her life; several of her later books involve various forms of growing magic and animals.)

But which would I choose?  That's a tricky one.  To my shame, I'm really not a very good gardener, and I'm not much of an animal person.   I doubt that dwimmer would choose me, though it sounds pretty great.  But I'm also not much into mechanics, like Joe and Roger are.  Any magic I developed would be more likely to be bookish and possibly mosaic-like, with patterns.  Like what Irene does.  But I'll certainly go for enchanter-level talents if any are available!
DWJ Month