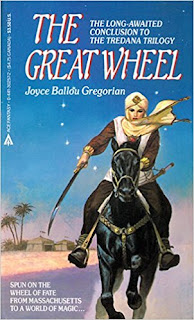 In January, I read the first two books in the Tredana trilogy, in which Sybil travels (at 11 and 19) to another world and takes part in world-changing politics.  I was really interested to read this last one, because while the first book, The Broken Citadel, was your basic fantasy novel, the next, Castledown, had some unusual elements and departed from the template in interesting ways.  The third features Sibyl in her 30s and I figured it might continue being unusual -- having an adult woman as the heroine of a fantasy novel is fairly unusual all on its own.  And yep, it delivered.

Sybil has no memory of Tredana and is just trying to build a life for herself while divorcing her husband when she is suddenly transported elsewhere.  She finds herself a prophesied sword-bearer in the entourage of Tibir the Lame, nomadic conquering king -- think the Golden Horde -- and he's in the midst of taking over all the lands and cities she once knew.  Still without any memories, Sybil meets her husband, her lover, and her daughter as they are all swept into the train of this great king.

Actually, half the story is told from the daughter Tamara's point of view, so it's not that ground-breaking.  But it's a pretty good story and also really....odd.  Structurally speaking, it's kind of weird that Sybil's husband, the villain of the last book, isn't there at all.  Instead they all wind up living with, essentially, Tamburlaine as he conquers the world, and they don't seem to mind all that much.  Sybil, who goes through a mystical experience and has no memory, has every reason to fall in with the plan, but her husband is set to become a vassal king and is surprisingly okay with that.  The boyfriend doesn't seem to mind giving up his position as a desert sheik in order to become an honored bodyguard.  A couple of other characters do point this out, especially to the husband, so it is ambiguous, but on the whole, everybody really likes Tibir and he's cast as a hero.  It's certainly different than your average sword-and-sorcery novel.

It's too bad these have been out of print for so long; I'd love to know what other book bloggers think!
SF/fantasy