The Fellowship of the Ring

The Fellowship of the Ring, by J. R. R. Tolkien

Brona is hosting an LOTR readalong, and in March we read The Fellowship of the Ring.  It's been a long, long time since I read it, and I enjoyed it so much!  I just didn't put it down for a few days.  Since there's no point in talking about the plot, I'll just put down a few random thoughts. 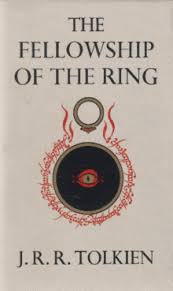 It really does take Frodo forever to get going.  Reluctant to leave the Shire and venture into danger, he waits until danger is on his doorstep.  I can't help thinking about Tolkien's experiences in World War I, which was so horrifying that in the 1930s, both Britain and France waited until it was just about too late.  The peoples of those countries didn't want to have to get into another awful war; they wanted to live decent, quiet lives in safety.  No wonder they hoped it would go away.  But just as for Frodo and the Shire, evil was coming for them regardless, and looking away only made it worse in the end.  (Yes, I know Tolkien said that LOTR wasn't an allegory and that he hated allegory.  But themes aren't allegory at all.)

For the first time, I found myself enjoying Tom Bombadil.  Previously, I've found him annoying and felt like he didn't belong to the story very well, but this time it worked for me.  Tom is, to my mind, what we might call a genius of the land; he belongs in his place and that's all he cares about.  He's very powerful and he's helpful, but he's not really any help in this fight unless it's on his own territory.

The trek through Moria is longer than I'd remembered, and most of it isn't that scary, right up until the battle at the end.  They even find a record of Balin's people.  But then it's all fighting and the bridge over Khazad-dûm.

Anyway, it was lovely to read this again and I'm looking forward to The Two Towers.  Thanks to Brona for deciding to do this!