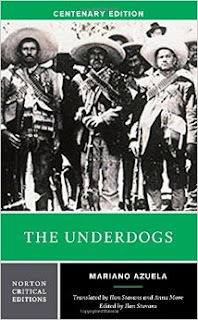 It's my very first official Reading Around the World title, and I chose to go next door to Mexico. The Underdogs (literally, those from underneath) is a short novel about the Mexican Revolution written in 1915; Azuela served as a doctor during the fighting.  I've got the Norton Critical Edition (and if you're going to read it, you should too, unless you know a lot more about the Mexican Revolution than I do), and the translator says not only that it's the best novel about the revolution, but in his opinion "may actually be the best Mexican novel ever."

Demetrio Macías is a tough peasant rancher in the sierra.  When he offends some local official, the Federales burn his home and he becomes the leader of a ratty bunch of rebels.  They move around, doing some fighting and some looting, and when Demetrio is injured, they spend a lot of time in one village.  A literate journalist, Luis Cervantes, joins them; he used to make a living writing articles criticizing the bandidos, but now wants to join the glorious cause.  He is quieter and more intelligent than the others (who kind of despise him and call him curro), and he helps out with his superior medical and political knowledge, but he also kind of preys on them, giving them drinking money in exchange for the smaller, more portable valuables they loot.  Camila, a sweet, plain peasant girl, has a crush on him but he deceives her into Demetrio's arms.   In the end, most of Demetrio's followers get killed (not Luis, who goes off to medical school in the US with his gains), and Macías goes home, unsatisfied and hopeless, before one last battle.

Azuela is not portraying these guys as romantic heroes fighting the oppressor.  He shows them, without a smidgen of sentiment, as rough, angry, and none too sure about where they're going or what they're doing.  Mostly they want to loot, dominate, and wreck, and they're perfectly willing to kill over nothing much (though they brag about it a lot more than they do it).  They hang around small villages, forcing their fellow peasants to feed and house them, and then go looking for somebody to fight.  They hope to get into power after the Federales are defeated, and then they plan to act just like their oppressors did.  I'm not sure Macías and his guys are the underdogs as much as the rest of the peasants of Mexico are -- they pay the same price regardless of who is in power.

It's not exactly the sort of novel you enjoy while curled up under a blanket -- it's mostly a rough and ugly picture of a rough and ugly time -- but it's an important one in Mexican literature that seems to offer an honest portrayal. 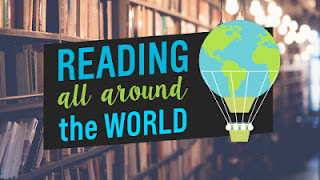