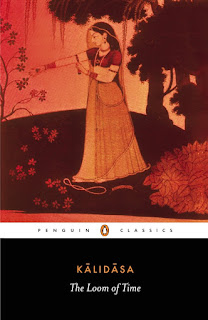 Shakuntala (The Recognition of Shakuntala), by Kālidāsa

Some time ago I read The Cloud Messenger, a longish poem by the Sanskrit poet Kālidāsa, who lived about 1500 years ago apparently.  I thought I would like to read his play, too.  The introduction of this book says that ancient Sanskrit drama was considered divine, a fifth Veda that was supposed to instruct through pleasure.  All could understand it (unlike the four Vedas), and it should represent the world, give good advice, and "bring peace of mind to those afflicted with the ills of the world" (such as kings).  Drama is not particular and individual, but shows a generalized picture and should produce "the aesthetic emotion" called rasa by building impressions through the words, music, and art.  The story therefore reads like a legend or fairy tale.

Shakuntala is a lovely, sheltered girl living in a holy enclave with her adopted father, the sage Kanva.  Other holy disciples and girls live there as well; it's a small community in the wilderness.  The king, Duhsanta, happens upon the hermitage during a hunt and stops to pay his respects to the sage.  There he meets Shakuntala, and they immediately fall in love, but Sage Kanva is temporarily absent, unable to give his consent.  Duhsanta determines that Shakuntala is an appropriate bride for him and talks her into an immediate marriage by declaration.  He then takes his leave, promising to send for her, but, naturally, there is a barrier to their love that must be conquered.

It's a lovely, poetic story that must have enchanted the court that saw it.  I'm sure the English version doesn't measure up to the original, so I can't appreciate it properly, but it was neat to read and it would be fun to see it performed.  It's not at all difficult to read, except that a glossary and cultural footnotes come in pretty handy, so the Penguin edition is a good one for those not familiar with ancient Indian literature and culture.  The Loom of Time collects two poems and this play.
Indian literature