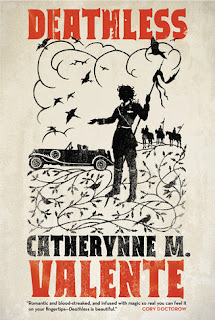 Is this a fabulous cover or what?  As soon as I saw this book and read the premise, I had to read it.  It's a fairy tale retelling with Koschei the Deathless and Marya, daughter of the Revolution.  (I maintain that "Koschei the Deathless" is the most fantastic name ever.)

As a little girl, Marya Morevna saw birds transform into husbands for her older sisters.  She waited for her own bird groom too, but The Russian Revolution changed all that and instead she became a revolutionary with a red neckerchief.  The tales she knew to be true got buried, until Koschei came to the door and whisked her away to a new life -- a life no less cruel than the old, but one where her best friends are a vila, a leshy, and a vintovnik.  She talks with domovoi and hunts firebirds, but Koschei is immersed in his war.  Marya clashes with Baba Yaga, who shows her the price paid by Koschei's many former wives when they, inevitably, ran off with their fairy-tale Ivans.  Marya manages to complete the impossible tasks set for her, but someday an Ivan will come for her too, and she will have to choose between two possible lives, each of which exacts its payment.

Valente intertwines the Russian folklore with Russian communism up through the war; St. Petersburg/Leningrad plays as large a part as the world of magic.  Marya spends time in a fairy war and in the siege of Leningrad; house elves hold soviet meetings, and Ivan, the youngest of three brothers, can be a soldier instead of a woodcutter.

This story is beautifully written, bizarre and strange, and fascinating to read.  Valente's husband is Russian and his family's heritage and tales served as the inspiration for this novel.  On the whole, I really enjoyed it, although, truth be told, it was a little much in the blood and sex department for my taste.  This is very much a fairy-tale retelling in the Angela Carter mode, though I think Valente did it quite a bit better and with more complexity and ambiguity.  If you're into fairy-tale retellings, this one is a must-read.
SF/fantasy