The Best of Leigh Brackett 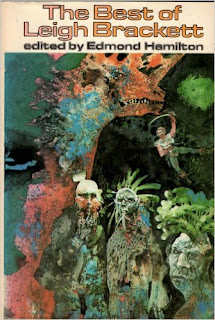 The Best of Leigh Brackett, ed. by Edmond Hamilton

Last year I discovered Leigh Brackett, Queen of Space Opera, when I read Black Amazon of Mars.  My brother lent me two Brackett collections, and I picked this one, which features some of her best short stories (chosen and edited by her husband, Edmond Hamilton, who also wrote a whole lot of SF including the book that features as the Vintage Sci-Fi Month poster -- boy I sure find a lot of things out this way!).  In reading the introduction, I discovered more fun facts: that Brackett's first screenplay work was with William Faulkner in The Big Sleep (my daughter, who is reading Faulkner in school, had just told me that Faulkner worked on that movie), she was asked to do more Chandler screenplays, and as time went on, publishers no longer wanted her Mars stories because real information about Mars was becoming known and they figured it was too implausible.

This is really a pretty great collection.  Some of them are individual stories, and some fit into the dramatic solar system background Brackett developed over years, with Mercury, Venus, and Mars each having their own characteristics.  So one story was about early Venusian settlers, refugees from Earth, trying to find a place to live, and another took place a couple of hundred years later, after Venus is fully settled and the humans have intermarried with Venusians.  There's a good story about the last days of a great Martian city, and another one about the last of an ancient Mercurian race who has enslaved a valley full of humans.  Of the individual stories, I best liked "The Woman from Altair," which is spooky and sympathetic.

This would be a great pick for anyone interested in finding out a little bit about Leigh Brackett.  It was a lot of fun, and each story makes a good read in a day.  I also have a trilogy of Skaith novels to read, which center on Brackett's hero Eric John Stark (aka N'Chaka of Mercury), and the first one is titled The Ginger Star -- pretty hard to resist.


_________________________________
In fact, my pile is not shrinking.  I bought two old paperbacks the other day, I still have Ubik, and I would kind of like to re-read The Worm Ouroboros, plus I have a ratty old paperback of Titus Groan I'm none too sure about and two old YA novels that go together called The Broken Citadel and Castledown.  Anybody ever heard of those?  I picked them up, ex-library hardcovers, some years ago and keep meaning to read them.
SF/fantasy TBR challenge