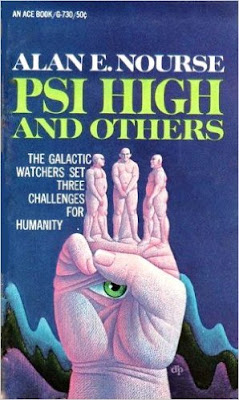 Psi-High and Others, by Alan E. Nourse

I found this at the used bookstore and the cover was so goofy that I had to take a picture.  Then I read the back and got curious about the Galactic Watchers, so here we are.  It's really three short pieces bound together by a common theme.

The Watchers have their eye on Earth, and will be judging whether humans can be allowed out of the solar system.  They've sent a representative down to work at a scientific research outfit.  Three tests will determine the outcome; first, when medical technology allows some few people to keep renewing themselves and live extremely long lives, what will be the result?  Then, humanity starts to develop telepathy, and in a story that sounds very much like something out of the X-Men, we see how mankind treats people who are other.  And the last story is about an alien attack that becomes a psychological war between the aliens and the tiny group of people trying to figure out what they even are.

The stories take place over years, with the judgement at the end (though I was irritated to see that the alien plant is never identified!  Maybe he had the same name in every story and I didn't notice?).  The title comes from the second story; telepaths are called Psi-Highs for no reason that I can understand.

Nourse was pretty well-known in his day, and also wrote under a couple of pseudonyms, including "Doctor X."  He came up with the title Bladerunner, which was lifted for the film, but his story has nothing to do with the movie otherwise.  And he also wrote a whole lot of nonfiction medical books for children and teens, the kind of thing you buy for a library collection.

This collection wasn't amazing or anything, but it was a decent read and better than I expected it to be!
SF/fantasy YA lit