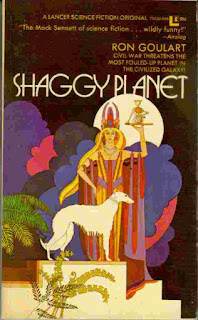 This is the first vintage SF novel I've read for the January event that is really a stinker.  I found it on our SF bookshelf and haven't the faintest idea where it came from, nor does my husband, and it turns out we've been giving this thing shelf space under the misguided idea that somebody got it on purpose.  This is just a dumb story and you should not read it.  It's supposed to be funny, but mostly it's clunky.  I wouldn't have bothered to finish it or to blog about it, but I found out some interesting things so I'll talk about those in a bit.

The plot is that this mercenary guy is hired to find a businessman who has gone missing on a mess of a planet called Murdstone, part of the Barnum system.  He's got a reporter girlfriend who wants an interview with a guerrilla leader, there's a famine and an opera and some rioting, and these weird shaggy animals they call hummels are suddenly all over town.  Mercenary guy follows the trail of the missing guy through six landscapes and a lot of escapades before he figures out what's going on.

It wasn't much.  There were a lot of androids going wrong.  The writing was desperately clunky in places, especially when describing people; a dialogue would have every other sentence ending in some permutation of "said the small, slightly plump blonde."  Or "the lovely slim young redhead."  Or "the tall narrow black man."  Over and over and over, like I was going to forget that the girl is slim and redheaded.

But let's talk about Ron Goulart for a moment, or at least, reel off a collection of fun facts that can be vaguely connected to him.  He's still around, aged about 85, and he wrote a ton of comedic SF and comics and various things.  He ghostwrote the TekWar books for William Shatner, and he's originally from Berkeley, one of my personal favorite places.  He went to Cal and wrote for the Pelican, which was the student humor newspaper -- it lasted about 80 years and folded in 1983, and it actually had its own building on campus with a pelican statue in front.  (The guy who founded the Pelican in 1903, Earle Anthony, had a lot of money and so could pay for Anthony Hall, which now houses the grad student association.)  Rube Goldberg drew artwork for the Pelican!  In my own day at Cal, a humor newspaper was finally re-started -- the Heuristic Squelch -- and it's still running.  It was frequently quite tasteless then, and probably still is, but that is after all the entire point of student humor newspapers.  The Pelican, also tastelessly, was apparently partly named because it was an uncomplimentary term for women students.  Since Cal was co-ed from 1871, three years after its founding and before it even had a real location, you would think that they'd have been used to the presence of female students...

Don't bother with Shaggy Planet.  It's terrible.  But now you know that Rube Goldberg drew cartoons at Cal, and that's kind of worth knowing.
SF/fantasy