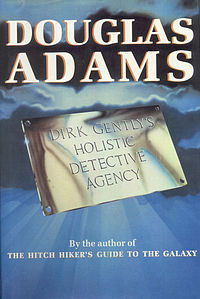 The Brits did a TV show based on this book, so of course I had to re-read it before I watch!  This doesn't count as a vintage SF title, but I read it in January anyway.  It is so long since I read Dirk Gently that I had forgotten pretty well everything, except the Electric Monk was slightly familiar.  And there was a bonus!

Richard, computer programmer and basic hapless fellow (in the tradition of Arthur Dent) gets caught up in some really strange events; a horse is in his old professor's bathroom, he finds himself climbing a dangerous wall for no particular reason, and his boss is found dead -- extra dead, in fact.  Richard turns to his old sketchy college acquaintance, currently known as Dirk Gently, holistic detective.  Through a long series of very odd occurrences, Dirk figures out what's going on.

It's all very fun and Adamsy, and I had a good time re-reading it.  Since I am now a good deal older and more widely-read than I was last time, I discovered an Easter egg bonus on this round.  Adams lifted his own old Doctor Who storylines for this novel; there is some of City of Death, and some of Shada.  Everybody knows this but me, so it's not exactly a great discovery; in fact, soon after I finished the book I started noticing ads all over Facebook for a free streaming of City of Death to go with the new Dirk Gently TV show. 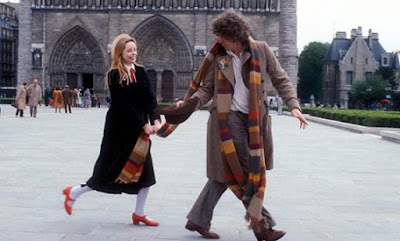 Adams was a bit ahead of his time with the 'holistic' thing; at least, it seems to me that holistic wasn't a trendy word back then, but it sure got to be one about 15 or 20 years later!  I'm sure it was current in some circles back then, though.  Nowadays we have holistic approaches to health and all sorts of things.  A couple of years ago in the car, my older daughter asked me what holistic meant and I tried to explain, but it didn't make any sense to her because she was looking at a shop that sold 'holistic water.'  We had to go home and look it up, and found out that holistic water is very, very pricey water with maybe some extra minerals thrown in.  It makes some really wild claims, but they're all expensive nonsense.  Ever since, she's been dying to go into the holistic water store and argue with the people there.

If you've never read Dirk Gently, it really is fun and you should.  I still haven't watched the show, so I hope it's pretty good too.
SF/fantasy