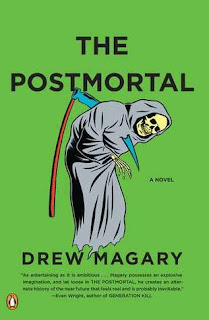 The Postmortal, by Drew Magary

In 2019, a cure for aging is developed.  It's a gene therapy that will prevent you from ever getting any older, although you can still get sick or die from plenty of other causes.  John Farrell gets the cure while it's still illegal, and he will be 29 forever.  His online journal entries over the next 60 years form this novel.

What happens when age can be cured?  According to Magary, first people party a lot (despite their lack of immunity from liver damage).  Pro-cure groups protest, demanding it be legalized, while pro-death groups insist the cure will be disastrous and are ready to commit a lot of terrorist acts in the name of getting rid of the cure.  People almost immediately stop getting married and start getting divorces, or inventing cycle marriages with expiration dates.  But within twenty years, things aren't looking so good.  The population of the US has exploded to 750 million and has become a third-world country, just like everywhere else on earth.  Drugs and crime are everywhere, while water and food is not.  (See, here we have a scenario where a massive water shortage makes perfect sense.)

Over the 60 years of the diary, Farrell records a society going down the tubes.  He has a son, who grows up to join the new Church of Man, but Farrell himself winds up as an end specialist working for the government's voluntary euthanasia program.  Well, it's voluntary at first....

This was not exactly a fun books to read, but it was gripping!  Magary has some great ideas and the whole thing is really pretty good.  I don't know why anybody would want to live forever anyway -- staying young for 40 years, I get that!  But who wants to live forever?   Not me.  And this novel explores some interesting stuff and makes a really good case for NOT trying to stop aging or kill off Death.

I bet it's already been optioned for a movie.  Probably starring Tom Hiddleston, with Scarlett Johansson as Solara.
SF/fantasy