The Statues That Walked 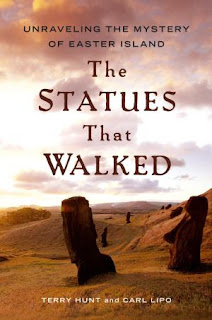 The Statues That Walked: Unraveling the Mystery of Easter Island, by Terry Hunt and Carl Lipo

Short version: this is a fantastically interesting book.  Read it!

Easter Island (aka Rapa Nui) is so famous that you would think that exhaustive archaeology work has already been done, and that everybody has a pretty good idea of what Rapanui society was like before the modern era.  NOT SO.  Instead, everybody has been depending on a hodgepodge of a narrative that postulated a society run by power-hungry kings presiding over warring tribes who committed "ecocide" in their insatiable desire for ever more statues, leaving Rapa Nui devastated.  Jared Diamond used this narrative as a dire warning in his famous 2011 book Collapse (which I have not read).  He was also completely wrong.

Hunt and Lipo were running some minor archaeological studies in the early 2000s, and they weren't actually after the moai at first; they were looking for some other things, and they expected to find confirmation of the traditional collapse story.  Instead, they found clues to a completely different history, which they lay out here.

They postulate a story that puts the settlement of Rapa Nui at 1200 AD, later than has been thought.  The soil of the island has always been poor for farming, because it's old volcanic soil (new is fertile; old is not), and instead of plowed fields as you would expect to see, the Rapanui practiced lithic mulching and other practices that involve using rocks to protect vulnerable plants.  The thick forests of palms are indeed gone now, but not because people chopped them all down to move statues; it was because the rats that traveled with Polynesians wherever they settled ate all the seeds and young shoots of the very slow-growing palms.  And the Rapanui were never a warlike people; the island is too small and the population too closely related to make war a profitable enterprise for anybody.

So what caused the collapse that so evidently shrank the Rapanui population and stopped the statue-building culture?  Well, the same tragic but utterly inevitable thing that caused every other newly-contacted population in the Western hemisphere to experience calamitous societal collapses: disease brought by unwitting Europeans.   As simple as that.  Plus, of course, the ensuing exploitation that all Polynesians were subjected to in the 18th and 19th centuries, but that came afterwards.

And what about the moai, those mysterious giant stone heads found all over the island?  Hunt and Lipo point out that we'll never know just what the rationale for them was, but they do think they figured out how the statues were moved around the island (not tree sleds), and that they served a particular societal function that made them beneficial.  But I won't spoil everything for you.

Fascinating book, I loved it.  Rather than a cautionary tale of a power-maddened people careening towards ecocide, the Rapanui are an example of a people who lived in the most marginal of ecologies, and fit their society to thrive within it.  So there, Jared Diamond.
history