The First Book of Calamity Leek 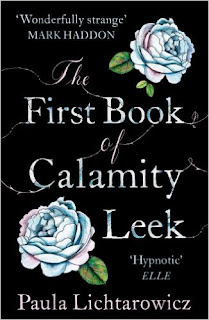 The First Book of Calamity Leek, by Paula Lichtarowicz

This YA novel was published in the UK a couple of years ago, and only in the UK.  I really really wanted to read it, so a little while ago we took advantage of AbeBooks and got a copy for just a few dollars.  Then I found out that it's coming out in the US in April next year, so you can read it too.

The reason I wanted to read it was the completely bizarre title.  Leek is my maiden name (I still use it officially) and Calamity Leek is such a weird name for a girl that I wanted to find out what the deal was.  If you're a Leek, then obviously you've got to read about this kid!

Calamity and her sixteen sisters live together in the Garden, kept safe by the Wall.  Outside is extremely dangerous, so they must never look; they are being trained for a special mission, which will be fulfilled soon.  Meanwhile, Aunty keeps them safe and the Divine Mother watches over them.  It sounds, at first, like a book set in a dystopia or other world, but it's much weirder than that.  When one of her sisters goes over the wall, Calamity's world starts to crumble.

The interesting thing about this story is that usually, the protagonist is the special girl, or the rebel, or the chosen one--the kid who breaks the mold and finds out what's really going on or starts the revolution or whatever.  Calamity is not the rebel.  She is the coward--the kid who, in the narrative structure, clings to the rules or tattletales, who is always admonishing the others to behave, or who otherwise does not go along with the curious rebels.  Calamity has invested her entire being into the rules that make her universe sensible, and she clings to them no matter what--long after they've ceased to make sense.

A pretty good YA novel, not really dystopian or fantasy even though it starts off sounding like it, pretty dang bizarre, and a refreshing perspective.  Read it!
YA lit